The growth is fuelled by ten driving factors, said the State of the Global Islamic Economy 2019/20 report from DinarStandard, the parent company of Salaam Gateway.

“Global growth is underpinned by 10 key drivers that include high growth and affluence among Muslim populations, increasing adherence to ethical values, continued engagement by global multinationals and investors, and a growing number of national strategies dedicated to halal products and related opportunities,” said the report.

63.6%, or $1.37 trillion of global Muslim expenditure went to food and beverages and the remaining 36.4% is divided among apparel and footwear, media and recreation, travel, pharmaceuticals, and cosmetics. 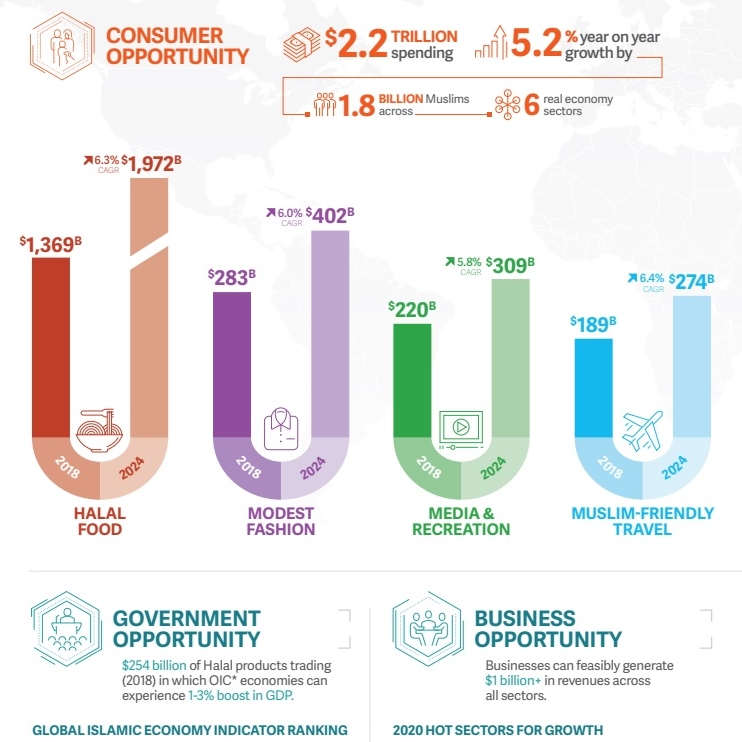 Pharmaceuticals expenditure stood at $92 billion from $87 billion in 2017 and Muslims spent an estimated $64 billion on cosmetics in 2018 compared to $61 billion in the previous year.

DinarStandard forecasts total Muslim expenditure on these sectors to reach $3.2 trillion by 2024 at a cumulative annual growth rate of 6.2%.

Corporate deals lead, with 80% of all investments, followed by 13% by private equity, 6% from venture capital and 1% from angel investors.

DinarStandard said halal products attracted the lion’s share of investments, accounting for 54% of deal value, followed by Islamic finance at 42% and 4% in Islamic lifestyle, mainly in modest fashion and Muslim-friendly tourism.

Future enablers for investments in the global Islamic economy include the $3.2 trillion sovereign wealth assets held by the 57 member states of the Organistion of Islamic Cooperation (OIC), as well as in the $11.3 trillion in global lslamic wealth, said the firm.

For 2020, this wealth could be channelled to key opportunities primarily across six segments identified by DinarStandard.

The State of the Global lslamic Economy report has been published annually through Salaam Gateway since 2013.

Commenting on the results of the report, Minister of Economy and Chairman of DIEDC, HE Sultan bin Saeed Al Mansouri, said: “The UAE’s consistent rank amongst the Top 3 in the Global Islamic Economy Indicator year after year is a key outcome of the Dubai: Capital of Islamic Economy initiative and its positive impact on the nation’s economy. The initiative is undergoing globalisation through multiple trade collaborations with entities around the world that are interested in the field, as well as the emirate’s regulatory leadership and robust Islamic finance activity.”

Governor of the Dubai International Financial Centre (DIFC) and secretary general of DIEDC, HE Essa Kazim, said: “The Islamic economy continues to achieve remarkable year-on-year growth across its sectors. The report shows that Islamic finance assets reached $2.5tn in 2018 and are expected to hit $3.4tn in 2024. These numbers indicate the critical role of the Islamic finance sector in the overall Islamic economic system. Successful adoption of modern technologies, such as fintech and digital banking, has created new opportunities for the sector and the wider Islamic economy.”