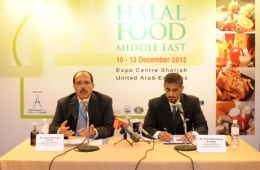 The Sharjah team was also expected to meet the Malaysian International Trade and Industry Minister, Datuk Seri Mustapa Mohamed, to discuss trade ties as well as share expertise for the show.

The Middle East Halal market holds high potential for Malaysian food exporters. Nearly one-third of the 1.6 billion global Muslim population lives in the Middle East and North Africa, prompting the global Halal food industry to look at the region earnestly to capture a major slice of the market share.

Besides, the Halal Food Middle East can play the role of a key facilitator of trade between Malaysia and the Gulf region, since the Malaysian International Trade and Industry has already identified GCC states as an important target to boost the country’s Halal product exports.

“Expo Centre Sharjah has wisely chosen the MIHAS to launch Halal Food Middle East to garner international attention for the show, what with MIHAS having more than 500 exhibitors from over 25 countries and 600 exhibition booths,” said Mr Jarwan, at a press conference to launch the show.

“We have a market that is yet to be fully tapped. The Muslim population in our part of the world is younger and growing faster, at a rate of 1.8% per year, and GDPs of most Muslim countries are expanding rapidly than in the West. For example, Qatar, which has a per capita income of more than $88,000, was recently ranked as the richest country in the world by Forbes magazine. The UAE came sixth with a per capita income of $47,500,” Mr Jarwan said.

Besides, generating increased demand for food is the rise in tourist arrivals in the region, with the UAE figures alone expected to touch 9 million, a 9% increase over last year.

Though the GCC countries are amongst the world’s richest in terms of oil and gas reserves and per capita wealth, when it comes to food sufficiency, the region needs to import almost 80 per cent of its requirements. According to latest statistics, the annual food import for GCC is set to grow from $25.8bn in 2010 to $53bn in 2020.

“These statistics and market indicators provide enough insights into the huge potential of our region. There are plenty of opportunities up for grabs and Halal Food Middle East will help Malaysian and global exporters find a firm foothold in the region,” said Mr Saif Mohammed Al Midfa.

The Halal Food Middle East will also be a boon for exporters in Malaysia, which recently invested more than $200m in five Halal parks across the country on the back of a more than 50% rise in exports to $12bn last year, to explore new markets and dealers for their products.

“Malaysia has built a commanding leadership as a Halal hub of choice for manufacturers, traders and consumers. At Halal Food ME, apart from gaining better exposure to their products, Malaysian exporters and establishments will also get a vantage point to champion the Halal cause in the region,” added Mr Midfa.

To effectively promote the show, Expo Centre Sharjah has tied up with the Morocco-based Islamic Centre for Development of Trade (ICDT), which is the trade and investment promotion wing of the Organisation of Islamic Cooperation (OIC).

The show is positioned as the largest and the most comprehensive show of its kind in the region, featuring Shariah-compliant food and beverages, bakery and confectionaries, broth products, food ingredients, frozen food, health products, herbs and spices, legumes & cereals, nuts and seeds, pastas and noodle, processed & seafood, snacks, and fruits & vegetables.

The Halal Food ME will be organized by Expo Centre Sharjah in association with the Sharjah Chamber of Commerce and Industry.