Dubai: His Highness Shaikh Mohammad Bin Rashid Al Maktoum, Vice-President and Prime Minister of the UAE and Ruler of Dubai, has ordered for the Halal World Food exhibition to be held annually.

Shaikh Mohammad also ordered expanding the exhibition, considering that it is the first gathering of its kind in the region and world that is positively received by manufacturers, distributors, and international investors.

The order was issued by Shaikh Mohammad during his visit to Halal World Food exhibition, organised on the sidelines of the Gulfood 2014. 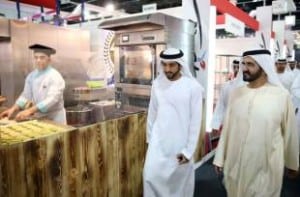 Shaikh Mohammad was briefed by Helal Saeed Al Merri, CEO of Dubai World Trade Centre, on various aspects of the exhibition. Al Merri explained that the exhibition represents a doorway for the entry of investors into the sector, either as manufacturers or distributors. He pointed out that the exhibition is, for the first time, being organised as part of Dubai’s plan to develop the Islamic economy sector, which is in line with the vision of Shaikh Mohammad to make Dubai the capital of Islamic economy, finance, and halal food sector.

Later, Shaikh Mohammad also toured Gulfood. Shaikh Mohammad expressed his satisfaction with the annual growth achieved by the exhibition, which emphasises its importance in the regional and international arena.