By Silvia Radan for Khaleej Times

For the next five years, 250 meals will be given for free to people in need across Abu Dhabi daily.

Inspired by the spirit and values of Ramadan, the “Think.Eat.Save” campaign is a partnership between the Environment Agency – Abu Dhabi (EAD), UAE Red Crescent Authority’s Saving Grace and Quattro Group’s Mocha cafes and restaurants.

The campaign, which will start this Ramadan, is meant not only to help people in need, but especially to raise awareness about food wastage and its consequences. 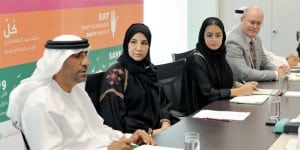 According to him, the UAE still has the highest per capita food (organic) waste in the world, which, when decaying in large quantities in landfills, releases large amounts of greenhouse gases such as methane, a harmful pollutant.

The United Nations Environment Programme’s statistics show that annually an estimated one-third of all food produced globally — 1.3 billion tonnes worth around $1 trillion — ends up in the bins of consumers and retailers.

Aside from the ethical implications of such wastage — as 900 million people go hungry everyday — unconsumed food wastes both the energy used in growing and producing it and the fuel used for transportation. Add to this the harmful greenhouse gas methane that emanates from food decomposing in landfills, while forests that are cut down for food production contribute to global warming. For example, agriculture and deforestation account for 30 per cent of the total greenhouse gas emissions globally.

In Abu Dhabi, 39 per cent of the household waste is organic (food).

“In light of the natural resource limitations we face in the UAE, including water resources and food production capabilities, food conservation and the reduction of its waste should be key priorities. We must adopt the best use of available resources, as well as raise awareness about reducing our collective foodprint during Ramadan,” stressed Fozeya Ibrahim Al Mahmoud, director of EAD’s environmental outreach division.

Mocha chef Nahar Kinan added that the campaign was more than welcome as it finally gave a purpose to Mocha’s unconsumed food that would otherwise end up in bins.

“We usually prepare between 700 to 800 meals per day and about 250 of them remained unsold,” said chef Kinan.

“The biggest waste comes from the catering industry because people are never sure how many portions they need and always order extra not to end up in the embarrassing situation of not having enough,” he added.

The 250 unsold meals that he will give away to Saving Grace everyday are in top quality condition, cooked on the day and well packed. The meals will be collected by the Saving Grace vans and distributed to people with very low income of any nationality, including those living in labour housing clusters.

“Our list of families in need reached 175,000 in 2012. Of course, when someone asks to be added on the list, we will go and assess the family’s situation,” explained Sultan Al Shehi, director of Saving Grace.

The project has been going on since 2004 and since last year, the donation also includes clothes. “We are now planning to include raw, uncooked food in the 15,000 monthly meals we distribute across the UAE.” Most of Saving Grace donors are large hotels and royal palaces, but the organisation hopes to attract major retailers, especially supermarkets. “We are currently in talks with Carrefour to give us food that is not expired, but close to expiring date,” mentioned Al Shehi.

Its 15 vans that go out daily to distribute food are properly equipped to transport food safely, according to Abu Dhabi Food Control Regulations. They also do not carry any logo, so those receiving food do not feel embarrassed about their situation. Those interested in donations to Saving Grace may call toll-free number 800-5011.