The Global Islamic Investment Gateway (GIIG) held a seminar at the Dubai International Financial Centre to discuss investment opportunities in the growing Islamic markets. The event was attended by over 90 professionals from the DIFC community.It was held ahead of the GIIG deal-making forum being held in Bahrain next month with the launch of a new Investment Monitor portal.

Leveraging the resources of Thomson Reuters, the Islamic Development Bank Group, and the Economic Development Board, the event is geared toward linking investors with opportunities aligned to their preference, and providing the information and assurance required to facilitate informed investment decision making. 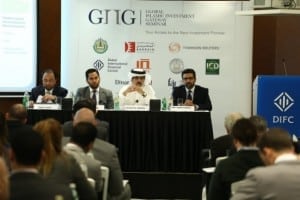 Dr. Sayd Farook, the global head Islamic capital markets at Thomson Reuters highlighted the escalating interest from international investors in the Islamic markets due to the large growing young population and the growth in OIC (Organization of Islamic Conference) members’ economies, which reached $6.7 trillion in GDP in 2013.

He added that Kellogg’s acquisition of Egyptian cake and biscuits marker Bisco Misr, is just one of a series of transactions, which reflect the potential of this market, driven by factors such as the intra OIC trade and finance initiatives, the $2.1 trillion Halal lifestyle market and the $1.65 trillion assets under management in these native markets.

The seminar also included a presentation by the CEO and Managing Director of US based DinarStandard, Rafi-uddin Shikoh, who called for a new thinking on investment in the growing Islamic economies.

Shikoh said that OIC markets has a rich set of breakthrough businesses driven by youthful populations and strong long-term dynamics of Islamic economies globally.  He added that despite inter-connectedness, investments remained mostly country or sub-region focused as from the MENA region led M&A deals in 2014, which reached $32.3 billion with a total of 386 deals, only 8 were from non-MENA Islamic growth markets such as Turkey, Indonesia, Malaysia.

Khaled Al Aboodi, CEO of the Islamic Corporation for the Development of the Private sector said the ICD is working to develop private sector of OIC markets through providing advisory and consultancy services and providing sharia compliant finance to develop SME’s which will result in creating more employment opportunities and economic development. ICD provided gross financing of $3 billion allocated to over 300 projects across 25 countries over its 15 years of operation.