Led by Wang Heshan, deputy governor of Ningxia Autonomous Region of the People’s Republic of China, the delegation also discussed the possibility of developing a trade bridge between Jafza and Yinchuan Free Zone with Ningxia province as a hub for bilateral trade between North West China and the Middle East region. 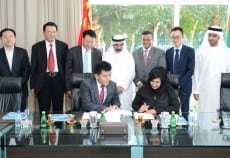 HE Salma Ali Saif Bin Hareb, CEO of Jafza’s parent company Economic Zones World (EZW), hosted the visitors at the free zone and empahsised Jafza’s desire to strengthen bilateral trade relations with the North West Region of China, which remains largely an untapped market for both imports and exports.

She said: “China is one of our most important trade partners. We are happy to see Ningxia Autonomous Region’s keen interest in developing closer business ties with Jafza, which is the business and logistics hub for the entire Middle East region comprising West Asia, the CIS and Africa.

North West China includes the autonomous regions of Ningxia and Xinjiang and the provinces of Shaanxi, Gansu and Qinghai. Ningxia ranks among the most resource rich provinces in China and has vast fertile land reserves.

Ningxia Autonomous Region wants to develop into a leading manufacturer of halal food, other halal products and textile as well as an e-Commerce hub for the North West China.

The delegation sought to explore comprehensive collaboration to establish a seamless supply chain to facilitate free flowing trade between the two regions through Jafza in the Middle East and Ningxia in the North West China.

The delegation also sought Jafza support in developing Yingchun Free Trade Zone as a Jafza counterpart in the region in terms of business ecosystem and efficiencies.