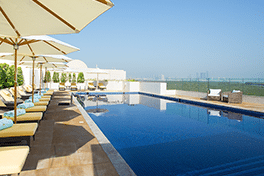 Abu Dhabi: Jannah Hotels and Resorts, an Abu Dhabi-based operator, is targeting a bigger share in the halal tourism market with the opening of the new Burj Al Sarab hotel in Abu Dhabi, according to Lennart Maas, the hotel’s manager.

In an interview with Gulf News, Maas said that halal tourism was a growing market, especially in the UAE, and Jannah was looking to capitalise on that.

The 318-key Jannah Burj Al Sarab, set to open in the next few days, is a dry hotel (it does not serve alcohol), with separate hours in the gym and pool for men and women in order to cater to GCC tourists and Emirati visitors.

However, the hotel is also eyeing more European and Asian tourists.

“[Halal] tourism is perfect for the region we’re in. It’s an increasing market,” Maas said.

The four-star property is also expected to cater to the increasing demand for more affordable accommodation, with plans to open a new three-star hotel in Dubai in late 2016.

“Entering the summer period, we’re scheduling the soft opening. Later on in the year, we forecast to be roughly around 75-80 per cent occupancy throughout the full year,” he said.

Jannah has already signed five memorandums of understanding to build five more hotels in the UAE in 2016, and is looking across the country’s borders for further expansion.

“The group has presented interest, and we have a letter of intent with an owner in Greece. There’s another owner in Oman that accepted a proposal and we’re negotiating now, so we’re not in final agreement yet,” Haddad said.

Currently only present in the UAE, Jannah hopes to add hotels in all GCC countries, and to enter the European market with a couple of properties. The group operates some brands that are not dry, which it hopes to use to penetrate the European market.

“We’re reinvesting all our profit into the growth. We’re not at this stage distributing dividends for partners,” he said.

Asked about average rates in Abu Dhabi, Haddad said there was still room for further increases — unlike Dubai — adding that rates have room to grow 20-40 per cent while remaining competitive.

Burj Al Sarab is Jannah’s fifth hotel in the UAE, with the group’s Andalus Hotels and Resorts set to open in December this year.