More than 4,000 visitors, mostly buyers and sellers of halal products and services, from 40 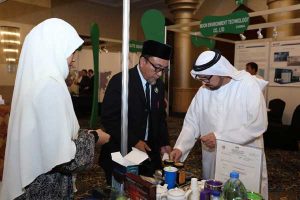 countries, as well as over 75 companies from 15 countries, attended the 10th Halal Expo Dubai, which opened yesterday (October 29) in Dubai, UAE.

The recognition will facilitate the trade of UAE halal products worldwide and acceptance of UAE halal standards in the international markets, as well as markets that accept UAE’s halal certification, of which there are 60 markets globally, said a statement.

The UAE is home to 5,000 importers, manufacturers and stockists of halal products. Emirates Authority for Standardisation and Metrology (Esma), the country’s standardisation authority, is expected to issue 18,000 halal certification this year – which is one of the highest in the world.

Companies from Kazakhstan, Malaysia, Spain, Pakistan, Switzerland, India, the UK, Brunei, Thailand, China and the UAE are participating at the show.

These developments are a direct result of the vision of the government as envisioned by HH Sheikh Mohammed bin Rashid Al Maktoum, Vice-President and Prime Minister of the UAE and Ruler of Dubai, when he declared his plan to transform Dubai as the global capital of Islamic Economy in 2013.

The global halal economy is estimated to touch the $6.4 trillion (Dh23.48 trillion) mark by 2018, up from $3.2 trillion in 2012, according to a latest report, while Dubai reinforces its position as the capital of the global Islamic economy as it opens doors to the 9th edition of the Halal Expo Dubai.

The GCC countries import $50 billion (Dh183 billion) worth of halal products, according to a latest research by Farrelly and Mitchell – a food and agri-business specialist. Of this, the UAE’s Halal import bill is $20 billion (Dh73 billion), or about 40 per cent of the GCC’s Halal products imports.

Dubai Food Park, a government initiative, has recently inked a Dh1.35 billion deal to establish a UAE-China food industrial cluster that will eventually support China’s $1 trillion ‘One Belt One Road’ initiative and help promote the speedy expansion of the Halal products and services across Asia, Europe and Africa.

Raees Ahmed, director of Orange Fairs and Events, organiser of the Halal Expo – Dubai, 2017, said: “Expo is part of our efforts to help Dubai strengthen its position as the global hub of Halal and Islamic economy.”

“The two-day exhibition will create the right meeting point for international buyers, sellers, producers, manufacturers, importers, exporters and wholesalers of Halal and Islamic products and services and help generate businesses for the leading international Halal suppliers through Dubai,” he said.

“Halal foods are considered to be healthy and hygienic. A growing number of non-Muslim consumers prefer halal foods, as they are deemed safer. As a result, the distribution of halal foods has expanded beyond traditional markets in cities such as Shanghai which has 80,000 Muslims,” he added.

China, the world’s largest producers and suppliers of consumer products and services, has taken Halal products seriously. China’s halal sector is expected to reach $1.9 trillion by 2021, a compound annual growth rate (CAGR) of 9 per cent from 2015, according to research.

“China is witnessing a growth in the number of national halal food players as well as partial halal product lines. In addition to demand from Muslim population, growing popularity of halal foods as a healthy option is also driving demand,” he said.

“We have witnessed a strong response from the Chinese manufacturers – who are taking Halal products and distribution more seriously,” he added.

Orange Fairs and Exhibition, is organising Halal Expo, an international exposition to highlight the growth in the ethical, moral and halal and healthy living, products and services.

Halal Expo Dubai is the largest and most comprehensive Business-to-Business (B2B) halal exposition in the Middle East for the $2.3 trillion global halal industry. The event, which attracted participation from 13 countries in its previous edition and registered 3,700 trade visitors from 40 countries, expect larger trade participation where buyers and sellers of halal products and services are expected to do brisk business.

Ahmed added: “We are extremely delighted to welcome the Chinese Pavilion at the expo, which reflects the fact that the Halal products and services are expanding beyond the Muslim world.”

“Chinese Pavilion will help create greater consumer awareness on the global Halal products, halal standards and the benefits of consuming clean, green and halal products – a trend that is fast spreading worldwide,” he said.