The global Halal industry has converged on Sharjah as the largest and the most comprehensive Halal event of its kind in the region got under way at Expo Centre Sharjah on Monday, 10th December 2012.

Encompassing the Halal Food Middle East and the Halal Congress Middle East, the event aims to showcase the US$ 2.77 trillion global Halal industry that is growing exponentially at 20 per cent annually to stakeholders from across the world. Of the global Halal industry, which covers food, health services and cosmetics, the annual food market alone accounts for about 20 per cent and is valued at around US$ 550 billion. 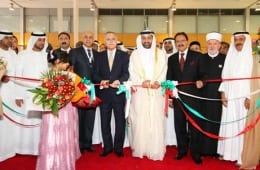 The Halal Food Middle East, which will run until December 12 at Expo Centre Sharjah, was inaugurated by H.E. Sheikh Saqr Bin Mohammed Bin Khalid Al Qassimi, Chairman of Sharjah Department of Islamic Affairs. The Halal Congress Middle East will be held on December 11 and 12 at the same venue.

A talking point at the opening ceremony was the selection of UAE’s Emirates Authority for Standardization and Metrology (ESMA) by OIC to chair the Halal food technical committee, which was seen as a global high point for the country and the regional Halal industry.

The decision is also significant given that GCC countries, which have approved more than 50 Halal certification bodies, are considering making it mandatory for all meat imported into the region to carry a Halal stamp.

“The UAE has emerged has a major player in the global Halal trade, given its diverse population that is mainly Muslim and proximity to several countries with large Muslim inhabitants such as those in the Indian sub-continent and the CIS. The UAE also serves as a re-export hub to the rest of the region, underscoring the importance of show as a premier sourcing platform and the necessity to draw up a common certification standard,” said Ahmed Mohammed Al Midfa.

“The growing demand for quality Halal products from the region presents an opportunity as well as a challenge to the global Halal industry. The region is crucial for the industry as it imports between 80 and 90 per cent of its food requirements. Fresh meats continue to be undersupplied in the Middle East as well as in other Muslim majority countries. The Halal Food ME together with the Halal Congress ME will help the industry capitalize on these opportunities,” said Saif Mohammed Al Midfa.

Special pavilions at the show will include that of the Trade Development Authority of Pakistan, IFANCA, Halal Italia and IMP Malaysia.

Billed as a one-stop platform for facilitating and sourcing the sale and purchase of food and related products that conform to Halal requirements, the show has local retail major Sharjah Cooperative Society as its Platinum Sponsor.

The Show will run until 12th December and the timings will be from 10am to 6pm on the first two days and 10am to 5pm on the last day.  Admission to trade and professional visitors only.

Being held under the theme ‘Global standard for quality, hygiene and safety’, the inaugural Halal Congress Middle East have brought together leading Halal experts, scientists and promoters from all over the world.

“Halal Congress ME is a premier gathering of food producers, exporters & importers, dealers and distributors and industry stalwarts from Halal hotspots of the world. At the congress, they will share up-to-date information on Halal products; discuss issues facing the industry; explore opportunities that exist is each others’ markets; evaluate compliance, certification and standards; and look out for investment and joint venture opportunities in the UAE,” said Sajjad.

The sessions will cover Halal overview and opportunities in the US, South Africa and India; Halal Standards; Halal food; Halal cosmetics & pharmaceuticals; and Halal trade promotion.

Halal experts, scientists and scholars from 12 countries will make presentations and read out their papers during the two-day congress.