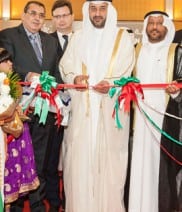 The 3rd Halal Middle East Exhibition & Congress got under way at Expo Centre Sharjah on Monday (December 8), providing a high-profile meeting ground for the global halal industry and its stakeholders.

With spending on halal products and services worldwide set to increase more than 50% to US$2.47 trillion by 2018 from US$1.62 trillion in 2012, mostly due to rising demand in the Middle East and Asia, industry observers attach much significance to the three-day trade fair and congress.

“From a niche segment, halal has grown to become a huge industry with a massive growth rate. Rising global demand, increasing consumer awareness & spending, launch of new products and categories, efforts by several countries to gain better foothold in the industry and a renewed push to harmonize regulations are making it one of the fastest growing industries in the world,” said Mr. Midfa.

“The event is one of the largest and most comprehensive ones in the region given that it consists of a trade fair and a congress, a series of specialized workshops, seminars and the complementary kitchen show,” added Mr. Midfa.

Apart from exhibitors from across the world, the exhibition is hosting special pavilions from countries such as Thailand, South Africa, Iran and the Philippines. Thailand and South Africa pavilions are making their debut at the show.

“The food industry in Thailand is well respected and accepted across the world and we are bringing six leading halal names to the event. We are providing a major entry vehicle to our exhibitors to the regional market through the show,” said Ms. Suntaree Getkong, Assistant Vice-President, National Food Institute, Ministry of Industry – Thailand.

The South African National Halal Authority (SANHA) is leading a pavilion of 14 companies from South Africa to the show. “SANHA is committed to standardizing halal procedures locally and globally by promoting uniformity, professionalism, transparency and accountability. At Halal Middle East, our pavilion will promote quality halal products to the Middle East markets. This will also help boost South African exports to this region,” said Mr. Suleman Mahomedy, Executive Officer, SANHA.

Delegations from several countries are also visiting the show in order to find new markets and develop their products. The Philippine delegation aims to learn best halal industry practices of different OIC member countries and tap into their expertise to improve its industries, Mr. Aleem Siddiqui Guiapal, Bureau Director of the National Council on Muslim Filipinos’ Economic Affairs, was quoted as saying in local media.

“The 3rd Halal Congress Middle East will literally open the doors to the trillion-dollar halal market. While the issue of Shariah compliance and global standards will lay foundation for the Congress sessions, several topics that look into business opportunities, branding, future developments and challenges are being taken up by speakers who are well-known names in the field,” added Mr. Midfa.

The 2nd Kitchen Equipment & Technology Exhibition Middle East has become an integral part of the event, with the Chefs’ Tech Arena, which is organised by International Centre for Culinary Arts (ICCA), Dubai, being an instant hit with visitors.

“At ICCA, we embrace technology, innovation and application in our daily practice. The organizing and running of the Chefs Tech Arena is in line with this practice. The Chefs Tech Arena will give an insight to new technology and trends, featuring a fully functional industrial kitchen, with a smart, live production for around 500 persons on each day of the expo by Team ICCA,” said Mr. Sunjeh Raja, Director and CEO of International Centre for Culinary Arts, Dubai.

It is also featuring seminars on topics such as complete kitchen solutions at design stage, blast freezing techniques for tomorrow’s kitchens and eco-friendly exhaust systems, apart from a Chef Networking Point for visiting chefs to interact and network and a Kitchen Consultant Clinic that provides design & trouble shooting advice to commercial kitchen owners.

Other attractions at the show include a workshop on the basics of meat preparation by Chef Tarek Ibrahim and ICCA, and barista coffee making and gelato making demos.

The shows are open from 10 am to 6 pm from December 8 to 10 at Expo Centre Sharjah. Admission is free and restricted to trade and professional visitors only.