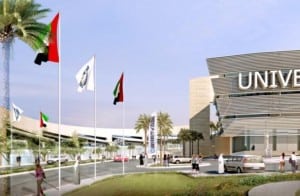 The University of Dubai, one of the leading higher education institutions in the United Arab Emirates, held a meeting of the board of trustees this month to discuss the university’s development plans and new projects.

The meeting, chaired by H.E. Majid Hamad Al Shamsi, Chairman, Board of Trustees, discussed a number of topics, including the progress of the construction of the university’s new premises at Academic City in Ruwayyah area, which is expected to be completed in June next year in time for the 2015-2016 academic year. H.E. Al Shamsi and members of the board praised the changes in the various courses and the improvements achieved in the overall quality of the education process.

The new premises is spread across 22.270 square meters, and is capable of accommodating 1,500 students. It features a new building which houses the University Center, College of Business Administration, College of Information Technology, and the College of Law.

The building, which has been designed on green building standards, also offers a range of modern facilities, including a hall of studies, a conference hall, a modern library, language labs and seminar rooms.

During the meeting, the council members evaluated the current academic year and approved degrees for the graduates for this year. They also discussed the addition of Islamic economy courses in line with the directives of His Highness Sheikh Mohammed bin Rashid Al Maktoum, UAE Vice President and Prime Minister and Ruler of Dubai, to make Dubai the capital of Islamic economy in the coming years.

Dr. Eesa Bastaki, President, University of Dubai, said: “The education system must enable the new generation of students to realize Islamic economy concepts in order to achieve Dubai’s strategy for the development of Islamic economy. Therefore, it is important for universities to take proactive steps towards adding educational courses matching the future requirements of this sector.”

The meeting also looked at the university’s efforts on Smart Dubai Initiative, besides discussing and approving the budget for the academic year 2014-2015.