MALAYSIAN Biotechnology Corp Sdn Bhd (BiotechCorp) has teamed up
with property developer UEM Land Holdings Bhd to jointly set up a
biotechnology park in Nusajaya, Johor, with an initial investment of
RM550 million. 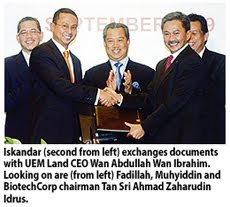 The two companies signed a joint-venture agreement yesterday to
develop the biotech park dubbed “Bio-XCell” at the Southern Industrial
and Logistics Clusters (SiLC) in Nusajaya.

BiotechCorp will hold a 60 per cent stake in the joint venture company, while UEM Land will take the rest.

Bio-XCell aims to create a dedicated biotech park with custom-built
facilities catering to commercial development, research and development
as well as production of industrial and pharmaceutical biotech products.
The RM550 million will pay for the land, as well as primary and secondary infrastructure.

“We will raise the money needed through a combination of internally
generated funds and borrowings,” BiotechCorp chief executive officer
Datuk Iskandar Mizal told reporters after its signing ceremony in Kuala
Lumpur.

The event did not only mark the start of the joint venture between
BiotechCorp and UEM Land, but also saw Holista Biotech Sdn Bhd signed a
collaboration agreement with University Sains Malaysia (USM) and
University Technology Malaysia (UTM).

Holista recently concluded its reverse takeover (RTO) of an
Australian biotech company, Colltech Australia Ltd, which is listed on
the Australian stock exchange.

Colltech is in the development and commercialisation of ovine (sheep) collagen.

The collaboration with USM is to conduct research on the development
of “halal” collagen and collagen standardisation, expected to turn
Malaysia into an important player in the global collagen market.

Holista’s tie-up with UTM, meanwhile, is in the launching of an
anti-aging cream with “Kacip Fatima”. The initiative will be a first in
the world.

By Business Times (by Presenna Nambiar)