URUMQI,
China — As Chinese leaders look to prevent another outbreak of ethnic
violence, they face a key question: how to spread China’s growing
wealth to its ethnic minorities when they are losing control over even
their traditional industries?

This month’s rioting in the capital of China’s northwestern Xinjiang
region left 197 people dead and more than 1,700 injured, the government
says. According to official statistics, most victims were ethnic
Chinese, or Han, attacked by Uighurs, the once-dominant group in
Xinjiang that is increasingly being eclipsed.

Although the immediate catalyst for the attacks appears to have been
the murder of two Uighurs in a southern Chinese factory, longer-term
problems have simmered. Like Tibetans, who rioted last year against Han
partly in protest of growing Han control of their region’s economic
life, many Uighurs feel that Han are taking over Xinjiang’s economy.
Most galling to some Uighurs, Han seem to be taking over traditional
Uighur industries — from traditional markets to Muslim foodstuffs. 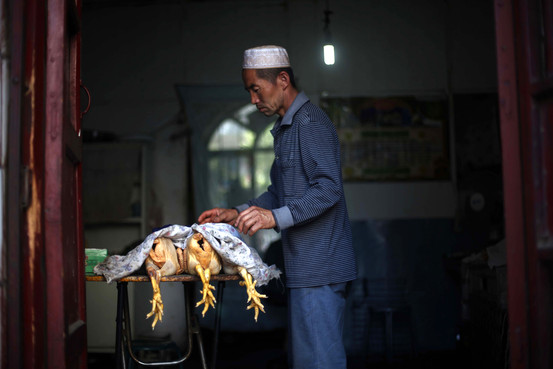 In
downtown Urumqi, for example, the main marketplace is in Han hands,
although it features sculptures of Uighur merchants outside and bills
itself as a grand Central Asian bazaar to rival Istanbul or Samarkand.
Even some large companies making halal foods — those prepared
according to Muslim purity laws — are run by Han and not Uighurs. In
tourism, which has boomed in recent years by featuring the exoticism of
the Uighur culture, Han companies seem to dominate.

“For the Uighurs, it’s their homeland, but they’re not the ones who
have benefited from economic growth and development,” says Jing Huang,
a professor of Chinese politics at National University of Singapore.

More than 90% of China’s population is Han, with the rest divided
among 55 smaller ethnic groups. China aims to help its minorities
through an array of generous policies, from easier college admission to
soft loans and hiring requirements. Some of these have helped to create
a small class of prosperous Uighurs who sit on government advisory
boards and have risen to top levels in the region’s government. The
current head of the exiled Uighur opposition, Rebiya Kadeer, for
example, was a prominent Uighur businesswoman before she left.

An exact calculation of ethnic income or hiring isn’t possible
because while the government collects such figures, it doesn’t make
them public. But available statistics indicate a stubborn gap.
Xinjiang’s economy has doubled from 2002 to 2008, but it remains
reliant on energy — especially oil, coal and gas — for 60% of its
economic output. The companies involved in these industries are run by
Han companies, and visits to oil fields suggest that most employees are
Han Chinese.

Rural statistics also imply ethnic inequality. Most Uighurs live in
the countryside, especially in the southern part of the province. Last
year, government statistics showed rural annual income averaged 3,800
yuan ($560) in Xinjiang as a whole, but for rural residents in southern
Xinjiang it is much lower. For example rural residents around the oasis
town of Khotan earn 2,226 yuan a year, according to government figures.
Agriculture in northern Xinjiang, which is less arid and supports
cotton farming, is controlled by the Han-dominated Xinjiang Production
and Construction Corps, a quasi-military organization established to
pacify the region.

Government
programs have sought to level this imbalance. Soft loans to small-scale
farmers, most of whom are Uighurs, have enabled them to expand
production. The government has also encouraged large food companies to
sign long-term contracts with small farmers to give them some economic
stability.

“The government really has made a good-faith effort to improve
minorities’ livelihood,” said Wang Ning, an economist at the Xinjiang
Academy of Social Sciences.

Anecdotal evidence suggests Han control has expanded beyond the
obvious areas of energy and large-scale agriculture. Huo Lanlan is a
prominent Han entrepreneur who runs Xinjiang Jiayu Industrial &
Trading Co. Her company offers 46 halal food products, from lamb and
horse meat to camel and chicken.It is now one of Xinjiang’s largest
halal food processors, supplying Air China with food for its flights to
Xinjiang and Muslim countries.

Most of her 300 employees, however, are Han, she says. She says she
has a few Uighur employees, such as a cleaning lady, but all top
positions are Han. “It’s a requirement of all halal food companies to
have Uighur employees,” she said.

Equally striking is the Grand Bazaar. Once a stronghold of Uighur
entrepreneurs, most of the bazaar was torn down and rebuilt in 2003 by
a Hong Kong developer and Xinjiang Grandscape Group, a Han-run company.
Just like in the fabled Silk Road city of Kashgar, whose old town is
being torn down by the city’s Han mayor, many Uighurs seem uneasy by
the developments.

The new bazaar now features anchor tenants, such as a Kentucky Fried
Chicken and French department-store chain Carrefour, both run by Han
Chinese. Located in the heart of the Uighur part of Urumqi, it hasn’t
yet been reopened because many of the tenants are Han and afraid to
return there, according to Han and Uighur business people interviewed.

Across the street is what is left of the traditional bazaar, a
ramshackle series of alleys lined with small-scale Uighur businesses.
The area is one of the last parts of the city where riot police are
omnipresent, and the road between the old and new bazaars is still
blocked to traffic.

“We are not so well organized like the Han,” said one Uighur who owns a stand selling jeans. “They have the bazaar now.”

—Jason Dean in Beijing contributed to this article.

Write to Ian Johnson at ian.johnson@wsj.com