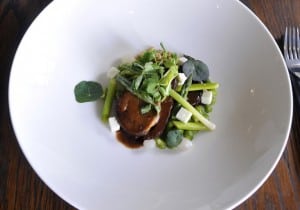 With Bradford finally emerging from the shadows, Amanda Wragg checks out the city’s halal fine-dining restaurant.

Bradford’s had its fair share of woes. Brutalist buildings courtesy of John Poulson in the 60s, several years of maverick town planning and, more recently, riots. In 1846, George Weerth, a young German on holiday in England, described Bradford in a far from positive light in a newspaper article he wrote: “In Bradford, however, you think you have been lodged with the devil incarnate. If anyone wants to feel how a poor sinner is tormented in Purgatory, let him travel to Bradford.” The tourist board must have been thrilled.

But Bradford’s enjoying a cautious renaissance. Centenary Square, with its magnificent City Hall, coloured fountains and great cafes and bars sees locals enjoying their city centre. The Westfield development promises ‘leisure and shopping’ and replaces the notorious ‘hole in the road’ which has blighted the city for a decade. The one-way system is a motorist’s nightmare right now but the reward for finding Little Germany makes getting lost worthwhile.

The ornate Italianate and gothic Victorian architecture – towering buildings constructed by Jewish merchants from Europe to store and sell textiles – have remained pretty well untouched; 55 of them are Grade II* listed.

It’s worth wandering around the atmospheric streets, drinking in the history. And now there’s another very good reason to make your way there.

Cona, a halal fine dining restaurant, occupies a corner on the bottom edge of Little Germany and is the brainchild of two young entrepreneurs, Armi Ahmed and Oman Rana, self-confessed foodies who have travelled the world seeking out the best eating experiences. Their idea was to give young professional Muslims a decent alternative to curry fare. You may have spotted that I’m none of the above, but that’s the joy of Cona – everyone’s welcome. The night we went, the range of diners was impressive; there was indeed a bunch of immaculately got up Asian lads, hipster kids, middle-aged revellers and a bunch of young women in Niquab.

As you approach you know you’ve landed somewhere special. On a warm summer night, cool, funky house tunes draw you in to a stripped down interior, all concrete and corian. No fuss, no clutter – in fact I don’t recall seeing a single object on the reception desk other than the mother of an espresso machine.

Despite the sparseness a huge amount of thought has gone into the detail. Mid-century modernists will recognise the Hans Wegner Round chairs (currently on display at MOMA in New York) and that beaten copper beast of a coffee machine is one of only two made yearly (‘Anthena’ by Victoria Arduino, for you purists.)

The Italian-ish menu is as stripped down as the room. Half a dozen starters and mains as is de rigeur, and includes the likes of asparagus, hazelnut, poached egg, rapeseed mayo and cauliflower risotto, both doing battle for our attention, but salmon confit with cucumber juice wins. And what an utter delight it is, summer on a plate. Gorgeous fresh colours and perfectly judged fish, the cucumber adding sweetness and crunch.

Salad of crab, apple and cucumber dressing does the job too. The white meat’s stunningly fresh – and just the right amount is piled onto a bruschetta. Baby cubes of apple are scattered round and bring a lovely perfume quality to the dish – the final flourish is a cross of samphire, brilliantly salty, all the elements working together.

It’s not often I’m inclined to work my way through a menu, dish by dish. But it’s incredibly hard to choose. Beef ragu pappardelle? Mushroom gnocchi, roast shallot, argula, parmesan? See what I mean? In the end, it’s braised beef, mash, carrots for my plus one, and lamb for me.

Similarly, the lamb is cooked beautifully – pink, tender as you like, full of flavour. There’s a scattering of nut granola which sounds odd but it works, bringing texture. Another unlikely addition are cubes of ewes milk cheese; someone’s thought this through so well. In the kitchen is Gavin Jackson who’s done a stint at the Devonshire Arms at Bolton Abbey.

Desserts are impressive: a pistachio and olive oil cake, dotted with an intense strawberry coulis produces more guttural sounds, and an exemplary chocolate fondant with salted caramel ice cream just about knocks my socks off. This is smart, modern food, full of surprises.

Armi grew up – and still lives – a mile from the door. He uses local butchers but his veg, bucking the air miles trend, comes weekly from Runji’s market in Paris. Cona is alcohol-free. San Pellegrino blood orange does very nicely. And as you’d expect, the coffee is astounding. Prices are as far from grasping as it’s possible to get, with starters around £4.50 and mains circling £12.

Hats off to this enterprising pair. They‘ve poured heart, soul and no small amount of cash into an untapped market.