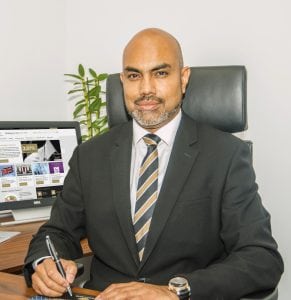 Sultan Choudhury has been named in the UK’s 2018 Muslim Power 100 list, in recognition of his role as Chief Executive Officer of Birmingham based Al Rayan Bank – the UK’s largest Islamic bank, and for his wider impact within the community.

The Muslim 100 Power list is compiled by Power 100, the research and analytical arm of The British Publishing Company; it recognises achievement from within international Muslim communities and celebrates the contribution made by Muslim men and women at a local, national and international level.

Sultan Choudhury has been credited for his achievements, including being part of the team that launched Al Rayan Bank in 2004 and overseeing its evolution into the UK’s largest Islamic bank, serving 80,000 customers of all faiths throughout the whole UK.

The recognition is also for his service to the Muslim community, through his position as Trustee of the National Zakat Foundation (NZF), a ground-breaking initiative which aims to utilise Zakat (charity) funds and voluntary donations collected in the UK for the benefit of local, deserving recipients across the country, as well as his role as Associate of Mosaic, the Prince’s Trust charity which inspires young people from deprived communities to realise their talents and potential.

This tribute joins several other recent accolades for Sultan, including an OBE from Her Majesty Queen Elizabeth II in her 2017 Birthday Honours List for his services to Islamic Finance.

Commenting on his inclusion in Muslim Power 100, Sultan Choudhury said, “It’s a great personal honour to be included in the Muslim Power 100 list alongside some truly inspirational individuals from Muslim communities throughout the UK. But really this is a tribute to the success of Al Rayan Bank and the hard work of my 250 colleagues who have helped drive the Bank forward. I look forward to supporting the continued growth of the Islamic Finance sector in any way I can.”