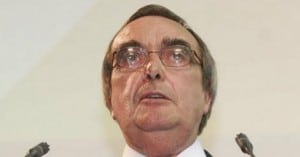 CCTV cameras should be set up inside all UK slaughterhouses to fight cruelty against animals, a Birmingham MP says.

Workers in seven randomly chosen slaughterhouses in different parts of the country were filmed kicking, punching and beating animals, burning them with cigarettes, picking them up by their fleeces and throwing them into stunning pens and dragging them by their ears.

Animal Aid also recorded animals being improperly stunned and coming round again, and suffering painful electrocution instead of being stunned.

He said: “There can be no excuse for cruelty to animals. It is utterly unacceptable for animals to be mistreated in this way, particularly in a country where there is a public consensus around the importance of animal welfare.

“I therefore support Animal Aid’s campaign to install CCTV in all slaughterhouses, to ensure that this abuse does not continue and those who carry it out are brought to justice.

“Unfortunately, this is a by-product of the factory farming system, where animals are treated as commodities to be produced as cheaply as possible rather than as living creatures which should not be made to suffer.

“We need to re-think the way animals are treated to ensure that this kind of gratuitous cruelty stops now.”

Kate Fowler, Head of Campaigns with Animal Aid, said: “There is no excuse for the savagery we filmed inside some slaughterhouses, and yet it went on right under the noses of vets stationed there to monitor welfare.

“Clearly, we need a more robust regulatory system, and CCTV can play an important part in deterring and detecting welfare breaches.”

In a 2014 YouGov poll commissioned by Animal Aid, 76 per cent of British adults backed CCTV being made mandatory in all UK slaughterhouses.

Mohammed Saleem Halal Adviser to the UK and EU parliamentarians said that he believes that all abattoirs, including halal, should embrace CCTV at their killing stations.

In backing The Birmingham MP Rogers Godsiff’s call for greater monitoring and fight cruelty against animals, Mr Saleem made it clear that any footage from cameras should be made available to customers such as supermarkets, manufacturers and wholesalers, to ensure their contract specifications were being met by the operators.

“Every abattoir in Britain should have closed-circuit television cameras installed, whether they are slaughtering halal or not, to ensure the highest health, hygiene and animal welfare standards,” he said.

CCTV would benefit halal suppliers as it “will ensure that farm animals have a ‘painless and humane’ end to their lives and also end the myth that halal slaughtering (Non stun) is barbaric”.

Mohammed Saleem concluded that whilst CCTV was a good option to have, it was up to individuals whether or not to have the cameras installed on their site.