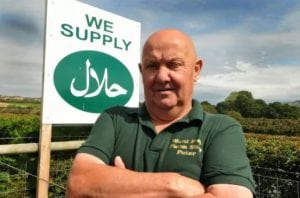 When Peter and Jean Bartley’s farm business started to suffer, a chance conversation helped turn their fortunes around. The couple made the decision to turn their farm halal – and just a few months on it’s going from strength to strength, with customers visiting from across the north west.
Peter and Jean retired to Lancaster from Cheshire four years ago – but soon took on Ward Field Farm in Galgate, and opened a farm shop on site. “Farms have been my whole life, I have never known anything else,” Peter, 69, said. Jean, 66, added: “Peter’s a farmer through and through and he couldn’t give it up, so we ended up taking this one on.”

Halal, meaning permitted, forms part of the Tayyib (good, pure and wholesome) and is an important part of a growing global market.

However, when the business started failing the couple feared for their future. Peter said: “People were asking us to run a butchers but we found it wasn’t successful enough but we were then told it may be a good idea to go Halal because there’s nobody between here and Preston that does it.

“It took me about 10 days to think about it. I took a gamble and up to now that gamble has paid off. I am glad I did it because I find it so interesting and the people we see are all very interesting too.”

The family-run business now sells Halal lamb, free range chicken and beef products, all freshly prepared and vacuum packed, as well as ready-made vegetable boxes and locally-produced jams, sauces and confectionery. The on-site farm shop is open seven days a week “until the bedroom light is switched off”, said Peter. 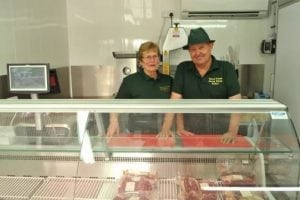 Peter admits the pair are still learning about their new business. “It’s a completely different way of farming,” he said. “The way our customers want their meat cutting fascinates me. It’s all done differently and that’s why we employ a Muslim butcher to do the cutting up for us. “We are finding that no two people want it cut the same way.
“In the last few months I have learned a lot and I have really enjoyed learning about it. “I don’t regret it for a minute. I have embraced something that I think maybe in two to three years’ time more people will see as something they should do too. “A lot of people don’t realise that without the Muslim community farming would be dying out – more farmers need to open their eyes to this. To make meat Halal, an animal – excluding pigs which are forbidden – or poultry has to be slaughtered in a ritual way known as Zibah or Zabihah.

“People don’t realise how much lamb in particular goes to the Muslim community. “I read recently that 88 per cent of all animals in England each week are killed halal, five per cent is kosher and the seven per cent is the traditional British way.”

The Bartleys use Rafiq Dean and son Asgar of Halal Services at Lancaster abattoir to kill their animals the correct Halal way. Ministry of Agriculture vets are present during each slaughter to check it is carried out properly. Despite some negative feedback when the farm first changed tack – with some even criticising the use of writing Halal in Arabic on the farm sign – Peter and Jean’s hard work is now paying off, with customers visiting the farm from across the north west, including Bolton, Blackburn, Stockport, Manchester, Rochdale, Oldham and Preston.
They also sell meat to staff and students at Lancaster University as well as more recently to the Syrian refugees who settled in Lancaster last year. “Hopefully we can help make their lives a little bit more pleasurable,” Peter said.
The couple, who have three sons and two grandsons, gained their official Halal Monitoring Committee (HMC) certificate last week, which will now be displayed on all their products. For halal purposes, an animal should not be dead prior to slaughter, a Muslim should perform the slaughter, any flowing blood of the carcass should be completely drained, and the method should be in line with Islamic principles.
“Quite a lot of people who buy from us are a bit wary about whether it’s really Halal because we are white English,” Peter said. “We wanted the HMC certificate so that we can prove it’s true Halal. “It gives the Muslim community that extra reassurance and trust in what we are doing, which can only be good for us.”