A proposal for comprehensive method of slaughter labelling was discussed by the All Party Group for Animal Welfare (APGAW) in the House of Lords on Tuesday 27th February 2018. The proposal, which was developed by Farmwel and FAI Farms, calls for all meat to be labelled by method of slaughter, not only meat from animals slaughtered without mechanical pre-stunning.

Farming minister, George Eustice, has given a clear indication recently that the Government will consider introducing labelling after the UK leaves the European Union.

Lord Trees response to this suggested that he is only keen on labelling halal and kosher  to help the wider community make an informed choice in not purchasing religiously slaughtered meat as he believes there is an over production of non stun meat.

The Halal Council believes labelling should reflect religious slaughter as defined in the UK law. The derogation of slaughter for both Muslims and Jews and further definition and labelling is not required, and would be seen as direct interference with religious rights and discrimination against halal and kosher.

Rizvan Khalid, AHDB Beef & Lamb board member, highlighted that production of non stun would go up considerably if halal was labelled with method of slaughter

Both Mohammed Saleem from the European Council for Halal Consumers and Shimon Cohen from Shechita UK were very happy to point out that labelling already exists for both halal and kosher products. Further to this, communities can purchase products within their respective areas with confidence that the labelling is already clearly displayed and that the process of slaughter was correctly applied.

It was further raised with the chair that such labelling as discussed was a targeted move by the BVA to discriminate against both Muslims and Jews. Shimon Cohen suggested that if the labelling was to be applied the community as a whole should be made aware of all the methods of slaughter, including gassing, electrocuting, captive bolt etc. 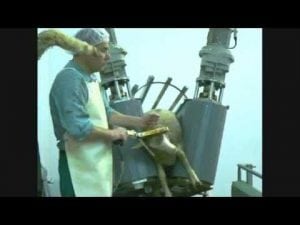 Mr Naved Syed, Managing Director, Janan Meat asked the committee , “If the welfare of the animal is the main concern of both the BVA and DEFRA, then why is DEFRA introducing new legislation to promote animal cruelty at the point of slaughter, with regards to the new V-restrainer?”

Syed said that DEFRA have made it clear that regarding the V restrainer for non stun halal that they are not interested animal welfare they are only interested in regulation even though the likes of NFU and on site vets have told them that new regulation to use it is far more cruel on the welfare of animals.

BVA were not able to answer the question. Phil Hadley forwarded  suggestions for voluntary schemes, as he believes compulsory labelling is not justified and the new V-restrainer process needs to be re-visited and new data should be presented to DEFRA.

Halal Council pointed out the reference used for Lancashire County Council as an example. Councils taking the lead for labelling of meat was incorrect as, in this instance, Jeff Driver banned religiously slaughtered meat in schools to divert attention away from his criminal investigation.