A man has admitted putting stickers on food in a Sainsbury’s supermarket in Greater Manchester saying “Beware halal is barbaric and funds terrorism” but he denied it was racially motivated.

Liam Gary Edwards, 29, pleaded not guilty at Manchester and Salford Magistrates’ Court to causing racially or religiously aggravated criminal damage after the stickers were discovered at the store in Salford.

A number of stickers were placed on meat products and equipment on February 18 at the supermarket on Regent Road, near his home in Chancel Avenue, Ordsall.

Edwards admitted possession of cannabis and causing criminal damage to food goods when he appeared in court on Wednesday.

Holly Holden, prosecuting, said Edwards fully admits his actions but claims he was protesting against the halal slaughter of animals – the rules of slaughter based on Islamic law. 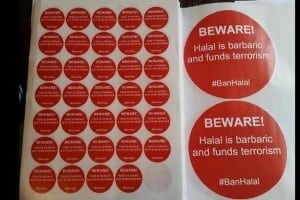 Miss Holden added: “The point about animal slaughter can be expressed in a different way without suggesting halal and terrorism is linked.”

His pleas were not accepted by the prosecution and he will go on trial for racially aggravated criminal damage later this year.

Mike Cahill, defending, said Edwards was protesting against halal slaughter and the reference to terrorism in the stickers referred neither to race nor religion.

District Judge James Hatton bailed Edwards on condition he does not go near the Sainsbury’s supermarket.

He will go on trial at the magistrates’ court on July 23.