It is the world’s fastest growing consumer group and estimated to be worth $2 trillion, yet many businesses and brands are failing to understand them.

New research on the Muslim lifestyle market has revealed the urgent need for marketers to adopt a targeted approach to capitalise on the potential of the consumer.

The international report Tapping into the Muslim consumer potential has also highlighted the growing influence of the younger generation, known as Muslim Millennials, who are behind the rapid growth in the sector due to their love for technology, higher disposable income and desire to explore the world.

This is the first time such thorough insights have been provided into one of the fastest-growing sectors across the globe which will be officially launched this weekend at the Muslim Lifestyle Expo 2017 (MLE2017) in Manchester.

The Muslim lifestyle sector has seen growth at nearly double the rate of the global economy with expenditure of consumers on food and lifestyle sectors growing by 9.5 per cent to $1.9 trillion in 2015 and projected to 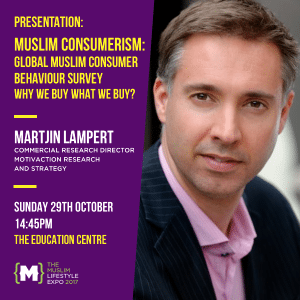 Martijn Lampert, research director of the Netherlands based Glocalities research programme, who is behind the report, said many marketers are still in the dark about the potential of the Muslim market.

He said: “Muslims will play an increasingly important role in global marketplace especially due to the young age demographic and consumer spending as a result of their rising purchasing power.

“This growth is fuelled by Muslim millennials, a young and dynamic group. Bringing energy, new ideas and a different outlook on life, they prove that Muslim citizens all over the world come in very different types and mindsets.

“Their diversity highlights the importance of targeted messaging based on a robust understanding of their values and preferences.”

“Its global appeal and reach means brands and businesses could be missing out on billions in revenue.

“The opportunities that exist for all businesses, regardless of religion, are too big to miss and this is precisely the reason we created this event and why it is now the world’s leading Muslim lifestyle event.”

The study looked at in-depth data covering 24 countries using benchmarks such as sociocultural trends, value cards and universal archetypes to understand the people behind the ‘’Muslim” label.

It examined the typical values Muslims adhere to and segmented this market according to the findings while also comparing Muslims in the West and Muslims from three major Muslim countries – Indonesia, Turkey and India.

The survey revealed that Muslim consumers were eager to know the story behind products and brands before making their purchasing decision.

An exclusive seminar dedicated to the report will be held at The Muslim Lifestyle Expo 2017 (MLE2017) – the world’s largest platform of the trillion pound Muslim lifestyle market – which returns to the city with its 2017 edition this weekend.

It is one of eight seminars discussing topics such as ‘Empowerment of Muslim Women’, ‘Challenging Hollywood’s depiction of the ‘Muslim baddie’ and Anti-Muslim attitudes in society.

Over 150 international and UK businesses are set to feature across 6,000 square metres of exhibition space with 15,000 visitors expected over the two-day event.

Brands who have signed up to attend include Toyota, Lexus, RAF, British Army, The Body Shop, Rubicon, My Lahore, Haute Elan and Manchester Art Gallery.

MLE2017, now in its third year, has been designed to provide a unique marketing platform for brands and businesses to engage with the Muslim consumer by bringing together a number of sectors under one platform over a two-day exhibition.

This year’s showcase welcomes brands from Canada, Malaysia, Singapore, France, UAE, Iran, Qatar and Saudi Arabia. The expo will take place at EventCity in Manchester and will feature over 150 exhibitors from sectors including fashion, food & drink, travel, media, Islamic finance, and health & beauty.

The showcase takes place at Manchester’s EventCity on October 28th to October 29th opening at 11am on both days and closing 8pm Saturday and 7pm Sunday.