West
Midlands farmers hope to tap into the £2.8bn UK halal meat market with
a scheme that will check animals are killed in accordance with Islamic
law.

The project, which follows a two year trial, will ensure livestock are
killed with a single cut to the throat in a halal abattoir.

About two thirds of halal meat in the UK is currently imported.

Farmers also hope to gain a share of the global halal market which is worth an estimated £75bn.

The scheme, which will begin in March, follows the trial arranged by
the regional development agency Advantage West Midlands and the West
Midlands Minority Ethnic Business Forum. 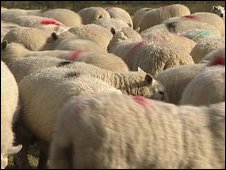 The
Qurbani Project sourced halal meat from about 200 animals on farms in
the region and was tested during the Muslim festival Eid-ul-Adha in
December 2008.

The animals were slaughtered in a halal abattoir and then distributed to poor people in Bosnia.

Farmers signed up to it cannot use pig manure, GM feeds or alcohol-based cleaners.

The NFU said it had been concerned about the welfare of animals but was reassured they would be stunned first.

A machine is used to monitor the animal to make sure it is unconscious but not dead when its throat is cut.

There are about two million Muslims in the UK but an estimated six million consumers of halal meat nationwide.

Michael Oakes, board member for rural affairs at Advantage West
Midlands, said British Muslims consumed 20% of all red meat sold in the
country while making up just 3% of the population.

Adam Quinney, chairman of the West Midlands NFU, said: “Beef and sheep
producers in the Midlands welcome the opportunity to take advantage of
the new markets now being opened up as a result of the Qurbani project.

“Being able to produce animals for halal meat with confidence that high
welfare standards will operate throughout the supply chain, will be
welcomed by livestock farmers.”