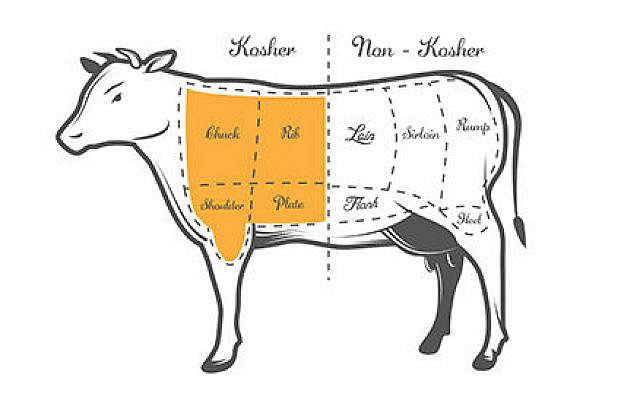 Waxing lyrical on the benefits that would accrue from reforms to the labelling of food products, Mrs Prentis does not beat about the bush. “We will not compromise,” she insists, “on our high environmental protection, animal welfare and food standards. I want us to ensure that consumers are able to differentiate between products that meet or exceed the UK’s high welfare standards and those that do not.”

There is an agenda here, but Mrs Prentis seems a trifle reluctant to admit it. Not so her boss, DEFRA’s Secretary of State George Eustice. Two years ago (2 July 2019 to be exact), in a Westminster Hall debate, Mr Eustice unburdened himself on the subject of religious slaughter with special reference to the stubbornness of us Jews in not agreeing that, as currently practised in England, shechita (the Jewish humane method of food animal slaughter) was inherently cruel.

It is our contention that shechita stuns and slaughters in one operation. But this view is not shared by Mr Eustice, or by DEFRA. Their view is that shechita is cruel because – in their view – it does not stun at all. But, in a supposedly magnanimous gesture, DEFRA concedes that if we Jews want to eat shechita-slaughtered meat, we can do so, provided we are prepared to acquiesce in official condemnation that we are engaged in deliberate animal cruelty.

Ideally, Mr Eustice would like to “ban the non-stunned slaughter of bovine animals” (i.e. cattle and sheep). But, as he admitted in 2019, “there are issues with that”. Top of the “issues” list is, of course, the no-small matter of religious freedom. But another, no less potent, is the standing of the Tory government in the eyes of Jewish voters and Jewish donors.

No doubt realising that this is the case, in that Westminster Hall debate Mr Eustice set out a range of other measures that he was minded to adopt. Among these is the option to actually label shechita-slaughtered meat as un-stunned. This – DEFRA presumably hopes – would sooner or later lead to shechita-slaughtered meat being totally boycotted by the general public, and perhaps, in the fullness of time, priced out of existence.

DEFRA concedes that if we Jews want to eat shechita-slaughtered meat, we can do so, provided we are prepared to acquiesce in official condemnation that we are engaged in deliberate animal cruelty.

People have every right to know what they are putting in their mouths. As a migraine sufferer, I’m an avid reader of food labels, so I’m naturally anxious that these labels give us as much information as possible as to the provenance of the food, its ingredients and so on.

Not only has the word “kosher” entered the English language as meaning “beyond reproach”. In this country, no case of “new variant” Creutzfeldt-Jakob brain disease — the human form of BSE or “mad cow” disease — has ever been traced to the consumption of shechita-slaughtered produce. Two decades ago, during the BSE scare, my kosher butcher reported that non-Jews had started patronising his shop because they suspected, rightly, that BSE was virtually unknown in cattle slaughtered for the Jewish market.

The reasons for this have to do with the pre-slaughter selection and examination of cattle and the method of slaughter itself. So the label “kosher slaughtered” could have a very positive effect in the marketplace. But only on one condition.

It is currently illegal for Jews to shechita-slaughter meat and poultry specifically for non-Jewish consumption. This prohibition — dating from 1933 — does, of course, restrain the free market. If the government were to recommend the repeal of this restriction, I would support labelling. Let kosher-slaughtered produce that finds its way onto the general market be labelled as such. Then let the market decide.

But I can tell you now that this would be fiercely resisted by DEFRA, and by the so-called animal-welfare lobbies, who naturally support derogatory labelling.

The consultation that Mrs Prentis has launched does not end until December. But it would be no bad thing if British Jewry were to demand, now, that in return for agreeing to non-derogatory labelling, the government should accept that shechita is a humane form of slaughter. After all, Boris Johnson and his colleagues may rest assured that the lamb that Jesus and his Disciples ate at the Last Supper [in reality the Passover seder] had been slaughtered by the Jewish method. If it was good enough for him…

Meanwhile, I do hope that our religious authorities will see a way to reintroduce the preparation and sale of kosher hind-quarter meat in this country. Such meat is widely available in Israel and America. Why not in the UK?

PS. In preparing this article I asked for an interview with DEFRA’s Permanent Secretary, Mrs Tamara Isaacs (née Finkelstein). I wanted to know whether Mrs Isaacs – whom I understand is a member of the New North London Synagogue – accepted that shechita stuns and slaughters in one operation, and if she did not, why not? Pleading pressure of business, on her behalf DEFRA’s media department declined my request.