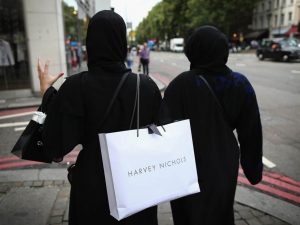 Visits to the UK from the GCC in the first quarter of 2019 were up by nine percent year on year, according to the latest figures from tourism agency VisitBritain.

Across the six Gulf countries combined, a record-breaking 177,000 visits were made to the UK between January and March.

Those visitors spent £382 million in the UK in the first three months of 2019 – up six per cent on the first quarter of 2018 spend levels.

The news follows the announcement of a new Tourism Sector Deal by the UK government, which aims to develop tourism recruitment and capacity, along with creating new tourism zones to encourage development and growth across the UK.

“The GCC is a significant market and a huge tourism opportunity for VisitBritain so I’m delighted to see such a growth in visitor numbers and spend,” Tricia Warwick, VisitBritain APMEA director, told Arabian Business.

“It is fantastic that more people than ever are travelling to Britain and enjoying experiences that you cannot get anywhere else, including world-class shopping and personal shopping experiences, fine-dining in Michelin star restaurants and luxury sporting and heritage breaks,” she said.

VisitBritain is working in conjunction with trade partners including Wego and the Seera group across the GCC, as well as airlines such as British Airways and Etihad Airways, to continue to amplify the regions’ healthy growth.

The UK’s largest halal tourism site HalalBooking recently reported record bookings worth $4 million for the month of June 2019 – the highest since the company started in 2009.

“We are delighted to report these milestones, despite challenging trading conditions in two major markets, with Brexit uncertainty in the UK, and the stark economic slowdown in Turkey,” Elnur Seyidli, CEO of HalalBooking.com said.

Most of the site’s bookings were in-bound to the UK from Europe or outbound from Europe to Morocco and Turkey. However, Ufuk Secgin, chief marketing officer for HalalBooking.com, said GCC bookings into the UK are ‘on the rise’.

“Gulf travellers often hire a whole flat for their family to stay in over the summer period, so they may not always use our hotel services but rent apartments instead.”

According to Secgin, the London ‘package’ is Europe’s number one choice for Gulf travellers.

“All these halal conscious factors plus attractions make life easier for Gulf travellers,” he said.