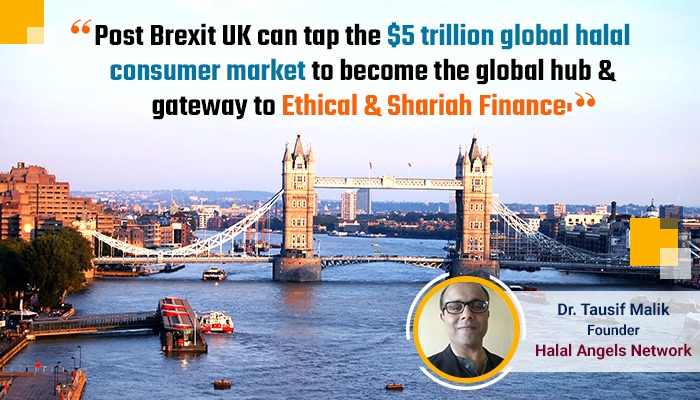 Headquarters in the UK starting January 2021

Halal Angels Network, an angel network launched in May this year to tap the $5 trillion Halal consumer market, is now establishing its headquarters in the UK, January 2021.

“Based on our research for an ideal location to move our headquarters, we felt that London, UK would be the ideal location for our new headquarters, as it is home to the majority of investment firms, family office, Venture capital, PE Firms, and Angels network,” Dr.Tausif Malik founder, Halal Angels Network, said.
He also said that based on the research post Brexit UK can reposition as the global hub and gateway to Ethical & Shariah Finance to the world.
Post-Brexit financial institutions are relocating to various cities across Europe such as Frankfurt, Dublin & Paris, according to Northwestern University Medill Report. “London’s emergence as an economic powerhouse has profound implications for the country’s economy post-Brexit. Financial services accounted for 15% of London’s economic output in 2017 and 6.9% of the United Kingdom’s economic output in 2018, according to a 2019 report by the House of Commons Library,” he added.
This would have overall implications on the economy, jobs, tax revenues, real estate and would have a domino effect. But sometimes challenges throw in new opportunities as, London, UK has been the financial capital of the world, and over the years it has developed an entire financial ecosystem to leverage and maintain its numero uno position.
Hence, post-Brexit UK can reposition itself as the global hub and gateway to Ethical & Shariah Finance to the world and leverage its ecosystem due to the following reasons: easy to set up business in the UK; low cost of registration of business; British Common Business Law is used worldwide; English as the primary language; UK the financial hub and capital; use this opportunity to counter the exodus of financial companies to different countries; UK home to highly qualified Muslim professionals in Finance, Law, Technology, Research, Academia, Entrepreneurs, and Investors, their network can be leveraged to promote UK can be the global hub & gateway to Shariah Finance to the world; UK long historical relationship with the Middle East & Muslim Countries; Sovereign Funds of the Middle East & Muslim Countries can be encouraged to establish their offices; the wealthy businessman, investors, and entrepreneurs have been investing in the UK in real estate, and businesses they can be leveraged to promote the UK can be the global hub & gateway to Shariah Finance to the world; and Halal is ethical and ethical finance is estimated to be $30 billion.
Halal Angels Network has partnered with two UK organisations – Educational Partners- UK for training & Fintech major, Delio for backend compliance.
According to Halal Angels Network research, the Ethical & Shariah Finance market has tremendous potential as it has been never tapped. “Post Covid-19 everyone needs to rethink strategy and tap new markets and this is an ideal time,” Dr Malik said.
Halal Angels Network, he said, would be keen and open to working with British policymakers, Universities, and organizations to leverage this market potential.
The company will be organising a series of Halal & Ethical Finance Summits in six global locations (San Francisco, London, Astana, Dubai, Jakarta, Dhaka & Nigeria), next year. These will be an invite-only event for private investors, VCs, PE firms, Sovereign funds to promote the market potentials of Halal & Ethical Finance.
The identified sectors for investment are – Future technologies (Blockchain, Fintech AI, etc), modest fashion & cosmetics, retail, pharmaceuticals, food cafe & restaurants, processed food & tourism investments. As Shariah-compliant investments play an important hence Fintech & Blockchain would be the investment focus.
According to Reuters, the Halal consumer market is valued at $5 trillion and would grow to $9.71 trillion by 2025. The economic development of leading countries such as Indonesia, Malaysia, India, Pakistan, Nigeria, and Iran is expected to boost the global halal products market reach over the coming years.