FROM sushi burritos to Belgian chocolate- coated dates, the UK halal market is giving businesses plenty of food for thought.

More entrepreneurs are focusing on food for the Muslim community, with a number of American-style restaurants and dessert parlours opening up across the country.

And with the economy worth around £800 million in the UK, firms are offering more adventurous cuisine, including rib eye steaks and bubblegum milk shakes. The new trend is for burger eateries, with Fat Burger, Big Fat Gourmet and Big Moe’s Diner all opening a branch in London this year.

Sheraz Ahmed is a director at Big Moe’s, which is based on an American diner with a jukebox playing 1950s music, a table shaped like a Cadillac car, and large red leather booths.

Ahmed told Eastern Eye he is planning to open three more diners in the capital this year due to demand.

“For our parents’ generation, halal food and eating out wasn’t part of the culture; they didn’t have the disposable income,” he said. “The second and third generation look at food differently. It’s part of their social life and they’re more informed about food and quality. “They are exposed to places like Dubai and the Middle East, which has given them ideas and expectations. People are more critical of high-quality meats, steaks and burgers. They are going away from the cheap takeaway set up.”

The menu at the diner includes halal lamb and beef steaks, jumbo burgers containing onion rings, and hot dogs along with ice-cream shakes. Among the ideas suggested by customers for the Big Moe’s menu are an English breakfast burger, a bubble gum and mango milkshake, and a chilli and chocolate burger.

Ahmed, who runs the branches in the Whitechapel and Beckton area, added: “The inspiration for Big Moe’s was the lack of themed family friendly eateries with quality food. “Ours is a 1950s diner with American spirit. Then, you didn’t hear of processed and pre-made food. All our food is made fresh daily.”

The halal sector is forecast to be worth more than £2 trillion by the end of this decade, according to the State of the Global Islamic Economy report, and is growing at nearly double the rate of the global economy generally. 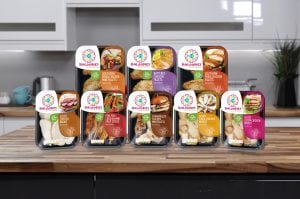 Imran Kausar, a co-founder of halal meat brand Haloodies, said another reason for the shift in tastes is the identity of young followers of Islam. He told Eastern Eye: “The millennial Muslims, those born from 1980 onwards, is our target market group.

“It’s this shift in identity which has led to a shift in tastes. They like South Asian food but want to expand their culinary horizons and are exposed to more cultures. US food is popular across the board.”

He said: “The halal food scene is really growing. Someone who has a bit more disposable income to spend on food is not just looking for chicken and chips anymore, we have so many options now.”