David Cameron has promised that halal slaughter will be “safe in Britain” for as long as he remains in power, decrying the “intolerance” towards Muslims that exists in some parts of the country.

The prime minister, who made similar promises with regards to kosher meat on a visit to Israel last month, said his government would never put restrictions on religious slaughter, which often includes animals that are not stunned before they are killed.

He also pledged to keep on tackling Islamophobia, saying Britain must “stamp out once and for all the intolerance that blights people’s lives.” 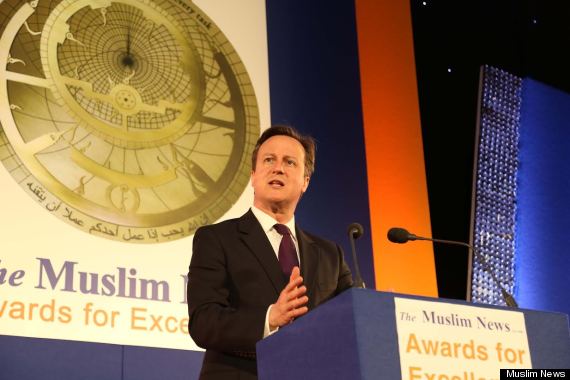 David Cameron at the Muslim News event
Speaking at the Muslim News Awards for Excellence in London, Cameron said: “Really tackling Islamophobia means making absolutely sure that no Muslim is held back from living their life or reaching their goals, simply because of the faith they follow.

“Soon the food will arrive and you will all be able to eat. Let me make it absolutely clear, that while I am prime minister of this country, halal is safe in Britain.”

He promised that the government would “keep on challenging the intolerant view of Muslims that exists in some parts of our country”.

Some animal rights campaigners complain that halal and kosher slaughter is cruel because the animal is killed by slashing its throat while it is fully conscious. But proponents of the method say it means animals are killed by a trained professional, rather than a machine, and lose consciousness within seconds after an artery in the throat is severed.

Last month, John Blackwell, president-elect of the British Veterinary Association, reignited the debate after he said the method resulted in “five or six seconds” of pain for the animal. and said: “I don’t think an outright ban is a long way off.”

The Danish meat industry bans the slaughter of animals which are not stunned prior to death.

Earlier the prime minister was introduced by the hosts at the awards ceremony as a descendant of royalty, and responded by joking that he was “only related to William IV because he did something he shouldn’t have done with someone he shouldn’t have been with”.

Shaykh Tauqir Ishaq, head of certification at the Halal Authority Board, welcomed what he called a ‘brave’ statement from Cameron. He said: “We welcome David Cameron’s comments that halal meat is safe. We believe, and we can prove, that it is the most humane way of slaughtering animals if performed correctly. Those countries that are creeping along the dangerous route to ban religious slaughter will just open up export markets for us in the UK, and those campaigners who are against the principle of religious slaughter need to be educated in animal welfare.”

But Naved Syed, halal adviser to the Yorkshire Association of Asian Businesses, disagreed. He said: “It’s all lip service. He’s just trying to get Muslim votes and say he’s doing something for the Muslim community.

“If he really meant it, why has the government not implemented the Food Standards Agency’s recommended guidelines for halal, first issued in 2003, and then again in 2010? If he can’t even be bothered to do that, then how are we supposed to trust him?”