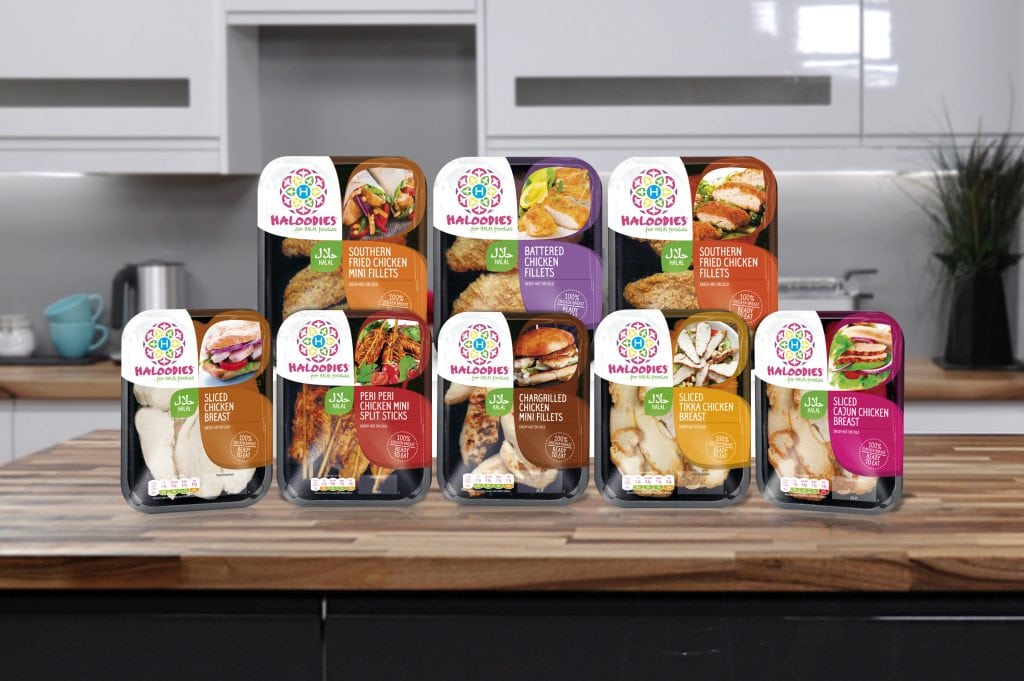 Haloodies Ready to Eat Cooked Chicken range now available in over 300 mainstream stores nationwide and over in 190 London postcodes with AmazonFresh.

Haloodies (Halal Foodies) is the Muslim-owned halal food brand aimed at millennial Muslims. We are extending our brand reach by launching our Ready to Eat, 100% Cooked Chicken Range into over 110 Sainsbury’s stores, extending into over 200 Tesco stores and online with AmazonFresh.

The chilled cooked chicken segment is relatively new for halal consumers and reflects the millennial Muslim’s need for convenience. Haloodies offers a complete range of 100% chicken breast products –a compelling alternative to existing products made with mechanically separated meats high in preservatives.

“Our new launches reflect the strength of our brand and the fact that millennial Muslims have needs that Haloodies can meet” said Mr Imran Kausar, Haloodies Co-Founder and Managing Director of KKR Halal Ltd. “Kantar WorldPanel data shows that basket spend of shoppers buying halal products is greater than that of those who don’t and retailers need to ensure they offer genuine halal brands. Haloodies is Muslim owned and that makes a difference of trust to customers.” “These launches show that Haloodies is well on its way to becoming the most trusted mainstream halal brand.”

Mr Noman Khawaja, Haloodies Co-Founder and Sales Director of KKR Halal Ltd. said “Sainsbury’s has been very receptive to the new Haloodies range and has gone to great lengths to understand and meet the needs of the halal consumer.” “With Haloodies products now available in more retailers and stores, it will be easier for halal consumers to find their favourite Haloodies products. We look forward to forming a long-lasting relationship with Sainsbury’s”

“Our partnership with Tesco has allowed us to introduce a new line very soon after launching in July and to increase stores rapidly” Noman added, “AmazonFresh continues to grow in availability across Greater London and we are excited to increase the Haloodies range.”

Haloodies have an ambitious pipeline of launches to come and recently exhibited at the SIAL trade show in Paris with support from the Department of International Trade, as the only halal brand in the British Pavilion. DIT has also supported Haloodies to exhibit at the upcoming Gulfoods 2017 in Dubai where Haloodies can access the large and growing Middle Eastern halal market with a British halal brand.

Launched in 2014 as a spin-off from the incredibly successful and innovative Halal Food Festival consumer show at the Excel in 2013, Haloodies immediately launched a range of pre-packed fresh chicken, lamb and beef with online retailer Ocado. This was the first ever halal meat brand for the online grocer where it has been growing in sales ever since. In 2014, Haloodies also became the first ever halal meat brand to introduce a fresh range with Harrods, available during the summer months to coincide with the rise in number of Middle Eastern visitors to the city. In June 2016 Haloodies launched a range of 16 lines with online retailer AmazonFresh. The company aspire to create the first global halal food brand.