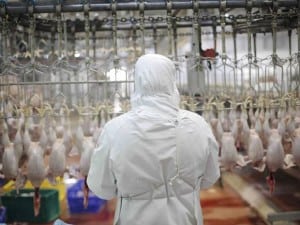 There has been a large increase in the proportion of animals killed through religious slaughter without first being stunned, a survey for the Food Standards Association has found.

The only progress on animal welfare was with Halal-slaughtered poultry, where slightly more (1.7%) were stunned than previously.

The number of animals killed without being first stunned for Jewish Kosher slaughter decreased across the board in the same period, however.

The overwhelming majority of animals killed using Halal methods are stunned before killing; around 80%, according to the British Veterinary Association.

This proportion appears to be falling, however. Awal Fuseini, certification manager of the Halal Food Authority, which stuns its animals, told The Times newspaper that the increase was due to “stronger campaigning” by some Muslim groups who believed stunning killed animals.

He said a trial to show that animals recovered would help convince campaigners that stunning was in accordance with Islamic law.

“If we are given the backing to do the trial then we can prove to people that whatever information they have that stunning kills animals is not true,” he told the newspaper.

One in 50 cattle killed in Britain is not stunned; roughly one in 30 chickens suffer the same fate. The figure rises to one in seven for sheep and goats.

The figures were obtained by visits from FSA officials to a representative sample of 232 slaughterhouses and was conducted in September 2013.

Working with the RSPCA, the British Veterinary Association has gathered 100,000 signatures on a petition calling for the end of the practice.

“The success of the e-petition reaching 100,000 signatures two months before the deadline shows the strength of public opinion and support for the aims of our campaign,” BVA president John Blackwell said. “Slaughter without stunning unnecessarily compromises animal welfare at the time of death and as such we call for an end to its practice.”

David Bowles, RSPCA Head of Public Affairs said there should be no exemption for religious groups.

“There is growing public concern about the welfare of farm animals and people believe animals should be treated as humanely as possible throughout their lives, including at the time of slaughter,” he argued.

“Animal welfare science and practical experience indicate that cutting animals’ throats while they are fully conscious can cause significant pain and distress. There should be no exemption under the law to allow non-stun slaughter and we urge politicians to take action on this important issue.”

A spokesperson for the Department for the Environment, Food, and Rural Affairs (DEFRA) said: “The government has no intention of banning religious slaughter. The government would prefer animals to be stunned before slaughter, but we respect the rights of Jewish and Muslim communities to eat meat in accordance with their beliefs.”

According to the 2011 UK Census the Muslim population is 2.7m comprising 4.8% of the population. The Food Standards Agency (FSA) carried out a welfare survey during the week 16-22 September 2013 requesting information which included data on different slaughter methods (www.food.gov.uk/news-updates/news/2015/13501/animal-welfare-survey-of-slaughterhouses-published ). Notably the survey did not collect the extent of mis-stuns for that week even though the question ‘Does the business operator monitor the effectiveness of the stun for each animal’ was in the survey so data collection should have been possible. Alarmingly 13% (29 out of 221) answered ‘No’ to this question. Neither did the survey include a breakdown of the type of permissible stuns used during religious slaughter (as not all stun methods are compatible) nor the number of animals that received a stun after the cut (post-cut stunning). The summarized results from the survey, as it relates to Halal meat production, are as follows.

Assuming 16-22 September is a representative week Table 2 establishes that at a UK level 2.5% of the total meat consumed in 2013 was produced by traditional Halal slaughter without stunning, which is significantly less than the 4.8% of the population that is Muslim. In 2011 the corresponding percentage was 2.1%.