The British Veterinary Association (BVA) has said it is concerned about figures revealing that almost two-thirds of food companies have no information on their commitment to stunning animals on slaughter.

Meanwhile, it was claimed that only 4% have “universal commitment”. 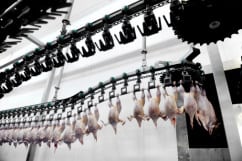 Wednesday 27 January. It was also shown that slaughter without pre-stunning was the only welfare measure that reflected a decline in the percentage of food companies that had a specific policy on the practice. Figures were down from 34% in 2014, to 32% in 2015.

“Vets and the public are united in their concern about animal welfare at slaughter,” said BVA president Sean Wensley.

“There are several positive findings on the growing commitment of food companies towards farm animal welfare in the BBFAW report, which we welcome, but the report highlights a disappointing lack of commitment towards animal welfare at the time of slaughter.”

He said that the industry needed to acknowledge consumers’ concerns surrounding the welfare of the animals they were eating. “The European Commission’s study of 13,500 meat consumers across Europe found that 72% wanted information about the stunning of animals at slaughter,” he added.

“Food companies need to sit up and take consumers’ concerns about humane slaughter seriously. People want to be assured that farmed animals receive both a good life and a humane death.”

The BVA has run a long-standing campaign to end the practice of non-stun slaughter within the UK. A 2015 public petition in support of the campaign gained 120,000 signatures.

It is believed by the BVA, with backing from leading farm animal welfare organisations, that all animals should be stunned before slaughter to render them unresponsive to pain. The BVA also claimed that scientific evidence supported the use of pre-stunning in slaughter.

Last year, two-thirds of BVA members highlighted the issue as one of their top three priorities for government.

However, this is not reflective of the entire industry. BVA’s comments about the lack of information surrounding slaughter conflicts with the practices carried out within the halal sector.

Shaykh Tauqir Ishaq, head of certification at the Halal Authority Board (HAB), said that the halal method of slaughter is the most humane in the country. “I think gas stunning is far crueller, unpredictable, and can’t really be controlled,” he told Meat Trades Journal.

“It takes many minutes for the animal to die and I’ve seen videos where the animal is screaming and is in pain and suffocating, and that’s very, very disturbing.”

In the past, Ishaq sent an open letter to BVA’s then president Robin Hargreaves to address some of the conflicts between the organisation and the halal sector. Despite this, it was claimed by Ishaq that he did not receive a proper response.

“Every now and again they [BVA] come out and shout about halal, but I think they should be shouting about animal welfare, and stunning is not necessarily the most humane method of slaughter, especially when it comes to, for example, gassing. We don’t really agree with them there and we haven’t got the evidence from them.”

Ishaq suggested that the BVA should focus on other issues, such as goading livestock.

Further communication between the BVA and the halal industry has been welcomed by Ishaq. “We don’t mind sitting with them, but as long as they’re happy to have a professional, calm discussion,” he concluded. “We’re happy to work with them and the industry is happy to speak with them.”