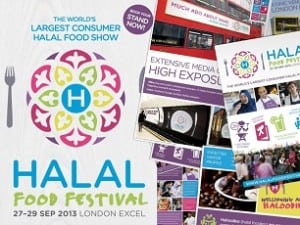 Accommodating the fast growing Muslims population in Britain, the first Halal food exhibition has been held in London to showcase the diversity of halal food, with dozens of exhibitors reflecting a growing market for the new industry all over the world.

“My inspiration for the three-day event at Excel London, came from my struggle to find Halal versions of non-south Asian food,” the festival’s founder Imran Kausar, told Press TV on Saturday, September 28.

Dubbed as “Haloodies”, or the halal-eating foodie, Britain’s first halal food exhibition has been held from 27-29 September, at Excel centre in London with the attendance of at least 100 exhibitors to feature halal food recipes.

“London’s become the gourmet burger capital of Europe but it’s lacking something for the halal-eating community,” said co-founder Salman Shaikh, who has encouraged non-halal eating friends to try the halal burger.

Deemed as the largest of its kind in the world, the event offered cooking classes by the UK’s most famous chefs who presented live cooking sessions.

“I don’t know what Delhi chicken curry is and I don’t usually cook,” Omar Javaid, 30, told The Guardian.

“A lot of my friends go to steak places, the high-end ones. I just won’t go because you don’t get the [halal] option. I’m hoping this festival will offer a few more options,” Javaid added.

Britain is home to a sizable Muslim minority of nearly 2.7 million, the census is expected to reach 5.5 million by 2013.

The concept of halal, — meaning permissible in Arabic — has traditionally been applied to food.

Muslim scholars agree that Shari`ah provides a divine law of mercy that should be applied on all Allah’s creations, including animals.

Last June, The first-ever Halal Food Festival held in Toronto, Canada has drawn record-breaking crowds, showing the diversity of the marketplace in a major North American city, and is looking forward to doing it again in 2014 after the success of the first show, said Salima Jivraj, the organiser.

At the exhibition center, a younger generation of Muslims was dominant among attendants.

“People who are older eat traditional Pakistani food. We are more diverse, we like fish and chips but we want to see halal fish and chips.

“We’re always querying, ‘is this halal?’ Here we know every single thing is.”

“It’s for people like me who love cooking and love food.”

Halal food has become a controversial issue in Britain over the past months.

Last February, a Birmingham school has apologized for serving non-halal food to Muslim students following an investigation on the school’s catering.

The incident was made public after a spokeswoman for the Food Standards Agency said the halal meat supplied to prisons involved traces of pork.

The discovery also comes as the country is still in the grip of the horse meat scandal, which last week saw Staffordshire County Council withdrawing beef from its school menus as a precaution.