Ministers are under pressure to respond to growing public discontent about religious slaughter after an undercover investigation exposed the horrific mistreatment of animals at a halal abattoir. 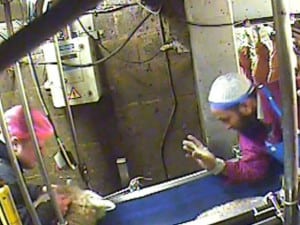 Secretly filmed footage which appears to show abattoir workers repeatedly hacking at sheep’s throats, hurling them into solid structures and kicking them in the face has intensified demands for a complete ban on the religious slaughter of animals without stunning them first.

Four slaughtermen at the North Yorkshire abattoir have had their operating licences suspended by the Food Standards Agency (FSA) after a catalogue of apparent brutality was caught on camera. The footage shows animals being treated with “gratuitous violence and contempt”, according to the charity Animal Aid, which carried out the investigation.

The film emerged days after a petition demanding that  slaughter without pre-stunning be outlawed passed the 100,000 mark, adding pressure on political leaders to bring in fresh curbs on inhumane practices in abattoirs.

The Government has said it has no intention of introducing new controls on the production of halal or kosher meat, a line that David Cameron repeated during a recent visit to Israel. Animals are meant to be stunned before they are killed, but there are exemptions for Muslim and Jewish producers.

The covert filming at the Bowood Lamb abattoir in Thirsk, North Yorkshire, appears to show workers hacking and sawing at throats in contravention of Islamic practice, which requires animals to be killed with one clean sweep of a knife. In one instance it took five attempts to sever blood vessels.

One worker, who is wearing the traditional Muslim kufi skullcap, recites the words Allahu Akbar (God is great) as he wields his blade. Other images captured during the filming of the slaughter of 400 sheep over three days seemed to show:

*Sheep being kicked in the face and head, lifted by their ears, fleeces or legs, and hurled into solid structures.

*A worker bouncing up and down on the neck of a sheep that is still conscious.

*Staff laughing over a sheep bleeding to death with spectacles drawn around its eyes in green paint.

*Knives being sharpened in front of sheep, which also saw other animals being shackled and hoisted.

*Sheep falling from a chute on to a slippery floor in the kill area and frequently thrown head-first into a solid upright structure, which is part of the conveyor.

The FSA said: “Four slaughtermen have had their licences suspended and we are investigating. It means they can’t operate as slaughtermen and work with live animals.

“When the FSA has finished investigating, it will need to consider if there is sufficient evidence of a breach of animal welfare legislation to justify a referral to the Crown Prosecution Service.”

Asked about the allegations, William Woodward, one of the abattoir’s directors, said the firm had no comment.

Animal Aid, the charity which recorded the footage, felt compelled to issue a lengthy statement acknowledging its fears that the footage could inflame religious hatred, but insisting the images were so shocking that they had to be released in the public interest.

It added: “Withholding release of the footage would be a betrayal of our key mission: to expose and combat animal cruelty.

“Bowood Lamb is the 10th slaughterhouse in which we have filmed undercover since January 2009. As with the others, we didn’t know what we would find when our cameras were planted, including that it was a halal establishment – the first we have investigated.”

The charity continued: “The feature that distinguishes it [Bowood] from the traditional ‘humane’ English slaughterhouse is that it kills animals without pre-stunning.

“Jewish and Muslim religious authorities assert that death by the shechita or halal methods, without pre-stunning, is instantaneous and painless. A body of evidence demonstrates that this is not a credible position, and our new footage removes any remaining doubt. Rather than animals being treated with compassion and being uninjured prior to the fatal cut, we see them routinely treated with gratuitous violence and contempt. Additionally, many of the sheep in our film are not dispatched with a single clean cut but have their throats hacked at repeatedly with a knife that is either blunt or being used ineptly.

“Compassionate people whatever their religious beliefs, or none, will be appalled by the treatment endured by these animals.”

An RSPCA spokeswoman said: “The public has a right to expect that all farmed animals have as painless and humane an end to their lives as possible…This footage sounds absolutely shocking.”

The petition calling for an end to non-stun slaughter has been championed by the British Veterinary Association, which has warned ministers that they “simply cannot ignore the strength of public feeling” over animal welfare.

Last night the Department for Environment, Food and Rural Affairs repeated it had no intention of banning religious slaughter. It said the Government preferred animals to be stunned before they are killed, but respected the rights of Jewish and Muslim communities to eat meat in accordance with their beliefs.

Last week David Cameron’s official spokesman said Mr Cameron remained firmly opposed to a ban. He said the Prime Minister still stood by the view he expressed in Israel, in support of those traditions.

“Existing rules require that where stunning is used it must be sufficient to make the animal unconscious and insensible to pain without… unnecessary pain, suffering or distress.”

Slaughterhouses are required by law to stun animals before they are killed to minimise suffering.

But there are exemptions for Muslim and Jewish producers to respect their religious traditions. For meat to be considered kosher under Jewish law or halal under Islamic law, the animal must be conscious when killed.

The halal code stipulates that animals are killed quickly with one sweep of a knife. They should not see the knife, or witness the death of other animals. Under UK law, slaughtered animals that have not been stunned must remain in position for at least 20 seconds after their throats are cut, to ensure loss of consciousness.

By Rose Troup Buchanan – The Independent 3/2/15

Undercover filming has exposed seemingly horrific animal rights abuses in a halal meat abattoir, but what is halal food? And why has it got campaigners increasingly agitated?

What does ‘halal’ mean?

Halal means “permissible” in Arabic and is used as a label for food which adheres to the rules set out in the Quran.

What does halal meat entail?

For the meat to be “permissible” – according to Islamic law – it must have conformed to the following:

The animal must be alive and healthy at the time of the slaughter. Beasts (or poultry) must be killed through a cut to the jugular vein, carotoid artery and windpipe, while a Muslim recites a dedication, known as tasmiya.

Afterwards, all blood is drained from the animal. This process is known as dhabiha.

Problems arise over the issue of whether or not it is religiously permissible to stun the animal prior to killing it.

According to the Halal Food Authority (HFA), a non-profit organisation that monitors adherence to Halal principles, stunning cannot be used to kill the animals, but it is permissible should the animal survive and is then killed by halal methods.

How many halal animals are stunned?

84 per cent of cattle, 81 per cent of sheep and 88 per cent of chickens slaughtered for halal meat were stunned before they died – according to UK Food Standards Agency figures from 2011.

Are halal abattoirs subject to the same laws as other abattoirs?

Yes, within the EU it has been mandatory since 1979 to stun animals before they are killed, although countries can grant exemptions for religious slaughter.

The UK is among those countries that allows exemptions on religious grounds. It is this caveat that has many campaigners so exercised. But, in return, there are actually more regulations in place governing the handling of animals that will not be stunned when slaughtered

So the debate boils down to whether or not halal meat is stunned (or not) prior to killing?

Correct. Animal campaigners feel that slaughter without pre-stunning causes “unnecessary suffering,” according to the RSPCA.

Their view is backed up by The British Veterinary Association (BVA), which says it believes “all animals should be effectively stunned before slaughter to improve the welfare of these animals”.