Two “greedy” businessmen who ran a scam to sell turkey as halal lamb meat have each been jailed for five years. 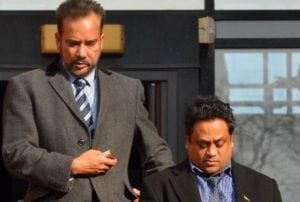 Meat importer, Mahmudar Rohman, and his friend, Kamal Rahman, were responsible for 160,000 kilos of non-halal turkey being passed off as more expensive boneless halal lamb at wholesalers, butchers, takeaways and restaurants across Leicester, the East Midlands and beyond.

The judge said the trickery had seriously impacted upon victims “financially, culturally and religiously.”

A butcher who was duped said the defendants had “betrayed all Muslims” and he felt their crime was as serious as “murder.”

Rohman, 46, and Rahman, 54, were convicted at a recent Leicester Crown Court trial of conspiring to defraud customers, by making false representations about the kind of meat being sold, between 2013 and 2014.

The scam, which netted estimated profits of between £380,000 and £700,000, was discovered in the wake of the horsemeat scandal that led to widespread checks being made and turkey DNA being found, said Kevin Barry, prosecuting, on behalf of Leicester City Council’s trading standards department.The falsely-labelled turkey was traced back to Rohman’s now defunct Peterborough-based meat suppliers, Dutch Bangla Direct Ltd.

Sentencing, Judge Marcus Tregilgas-Davey said: “You did it to make financial gain, motivated by financial greed and avarice.

“It was set up with legitimate intent but quickly became a vehicle for your fraud.

“Rahman was a well-known and respected businessman who owned, and had interests in, restaurants.

“He helped Rohman to set up the company and put him in contact with potential customers… playing an integral role and just as involved in the company, albeit behind the scenes.”

The judge said they had duped an “entirely blameless” Leicester-based father and son, Mohammed Anwarul Hogue (56) and Zunaid Hoque (25), from Oadby, to “unwittingly” help promote the business and make deliveries.

The Hoques were both acquitted of any criminal involvement by the jury.

Judge Tregilgas-Davey said: “The duping of those two individuals (the Hoques) and risking their reputations and standing within the community is an aggravating feature of this scam.

“The meat was neither halal nor was it lamb and was distributed in the Midlands and as far north as Middleborough and as far south as Portsmouth.”

During the trial, two German turkey suppliers told the court the turkey meat was slaughtered compliant with halal standards – but the judge said the businesses had not been certified as such.
He said: “A large number of people have eaten meat that offends their cultural and religious needs.

“I’ve heard how distressing it was from individuals who supplied non-halal meat to their long-standing customers who trusted them and having given it to their own families.”

The judge said: “The fraud, motivated by greed has impacted upon victims financially, culturally and religiously.”

Some victims lost business, including an entirely innocent butcher whose £2,000 a month contract with a Leicester community centre was terminated.

The judge told the defendants: “You both played a leading role.

“It was a flagrant disregard for the law with widespread impact and causing damage to the reputations of wholly innocent victims and their businesses.”

The judge also said he understood the defendants’ families would suffer if they were sent to prison, but added: “You should have thought about your families before your avaricious plan to dupe people into eating meat that was neither halal nor lamb – you only have yourselves to blame.”

Mauro Maselli, mitigating for Rohman, said that although it was not certified the turkey meat had “matched halal standards.”

He said his client did not have a “lavish lifestyle,” he had “limited means” and his family were due to be evicted from their home.

He said Rahman had worked tirelessly in community and charitable work and now faced being “ostracised” and “viewed as a pariah.”

Mr Barry, the prosecutor, said afterwards: “The sentence properly reflects the broad impact on the community this offending had, not just for individuals but on public confidence in the meat supply chain and particularly the supply of meat purporting to be halal – that’s what the judge felt really aggravated it to the point where a substantial sentence was called for.”

Ron Ruddock, manager of the Leicester City Council’s trading standards team, said his department were first alerted to the scam by their Food Safety Team.

He said it was a “complex investigation,” bringing the defendants to justice and the sentences sent out “a strong message.”

Rohman, of Rothbart Way, Peterborough, and Kamal Rahman, of Derby Drive, Peterborough, who denied all allegations and have no previous convictions, were convicted unanimously by the jury of the conspiracy.

Rahman was also found guilty of perverting the course of justice, by trying to persuade a customer to give trading standards false information about where the turkey came from.

Rohman was convicted of six counts of Food Safety Act breaches, two of possessing an articles for use in fraud, forgery and selling food with a false description.