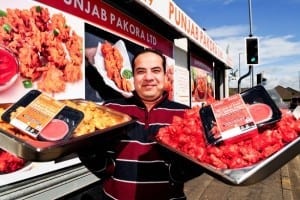 An Indian snack king is sending his products all over the UK – from a small commercial kitchen in Ayr.

He moved into a shutdown carpet showroom in Waggon Road and now supplies national chains such as Aldi and Spar.

This week dad-of-three Kushal, who lives in Prestwick, gained national publicity after his black pudding pakora was ridiculously claimed to be halal.

Kushal,46, said: “I am afraid my printer in Irvine made a mistake with the packaging. Of course black pudding can never be a halal product and we are sorry if anyone thought otherwise.”

A Muslim from England called the Ayrshire Post to stir up trouble after contacting Aldi to express his outrage.

But Kushal said: “We have issued a notice about the recent discovery of halal being advertised on the black pudding sleeve as being a printing mistake.

“We rectified the issue immediately, we sincerely apologise to the public who have been affected by this mistake and would like to thank everyone who brought this error to our attention.”

An Aldi spokesman also apologised, saying: “Regarding the Punjab Pakora Black Pudding Pakora (supplied by Punjab Pakora), we have now investigated this matter with the supplier, who has advised that the packaging was incorrectly labelled as halal-certified and the problem is currently being rectified.

“This product was only on sale in Scotland and has now been recalled.”

Punjab Pakora now has a total of seven products being despatched all over the UK and all made on the Waggon Road premises.

Kushal added: “The business is going from strength to strength and all the products are made right here in Ayr.”