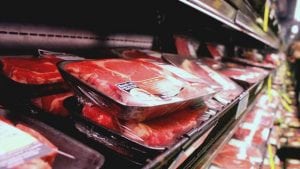 “should be labelled in shops”, a Lib Dem peer has said.
The party’s former environment spokesman Baroness Parminter told the Lib Dem party conference that meat obtained in this way should not be exported.
The Halal and Kosher slaughter methods both involve cutting an animal’s throat, windpipe and the blood vessels around its neck with a sharp blade.
Baroness Parminter said: “I accept the scientific evidence that the practice of killing by the throat, passing it without pre-stunning, does compromise animal welfare.
“So if slaughter’s going to be allowed in this country without pre-stunning to supply our Muslim and Jewish communities then it should be labelled so that people can make an informed choice and it should be for our own home markets, we should not be exporting it. They do that in the Netherlands, we should do it here.”
Her comments came as the party passed a motion calling on the Government to pay full regard to animal welfare, with a range of measures to improve the treatment of animals.
The party committed to phase out animal experiments, to reduce deformities in pedigree pets and make horse racing safer.
The conference also voted to ban inhumane glue traps and to end the use of wild animals in circuses immediately.
Members also called on the Government to guarantee that all future trade deals have animal welfare and environmental standards at least equivalent to those currently held in the UK.
Former leader Tim Farron, who is now the party’s environment spokesman, said: “The Liberal Democrats have always valued the part that animals play in our world and we will always demand the best environmental and welfare standards.
“Treating animals with respect is central to our liberal values and we call upon the Government to reflect this belief in its own policies. “As Liberal Democrats, we are always proud to stand up for the rights of those that cannot stand up for themselves and we demand the same from our Government.”