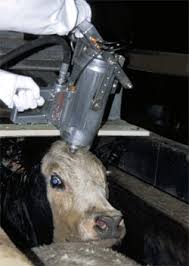 UK – Animals in British slaughterhouses are correctly stunned before slaughter in over 99 per cent of cases, according to official figures released by the Government.

The new figures expose the myth that animals are suffering welfare compromises in large numbers – a statement used by those who support the practice of slaughter without pre-stunning.

The British Veterinary Association (BVA) has been calling for an end to the practice of non-stun slaughter on the grounds of animal welfare. BVA’s position is informed by scientific evidence that shows that slaughter without stunning unnecessarily compromises animal welfare. The position is supported by the Farm Animal Welfare Committee, RSPCA, and the Humane Slaughter Association.

Those who oppose BVA’s position on non-stun slaughter have suggested that mis-stunning occurs in large numbers causing a greater welfare problem than slaughter without stunning, quoting figures of nine to 31 per cent from a Europe-wide Efsa report in 2004.

The new figures reveal that in 2013 there were only nine reports of mis-stunning incidents in cattle (0.0004 per cent of cattle slaughtered) and three reports in sheep (0.00002 per cent). These reports are made by Official Veterinarians working in abattoirs and collated by the Food Standards Agency on behalf of Defra.

Reported incidents of mis-stunning in poultry totalled 13 in 2013 but as poultry are usually slaughtered on a line system a single incident will normally represent more than one animal. It is therefore not possible to calculate the percentage of mis-stuns against the total slaughter numbers.

Commenting on the new figures, Robin Hargreaves, President of the British Veterinary Association, said: “These new official figures reveal that mis-stunning is extremely rare in British abattoirs and expose the myth that mis-stunning is a greater animal welfare problem than non-stun slaughter.

“Of course any incident of mis-stunning must be acted upon and the public should be reassured that there is legislation in place to ensure that mis-stunned animals are immediately re-stunned to render them unconscious. Each incident is recorded and immediate and appropriate action is taken to address any problems.

“As veterinary surgeons our number one priority is animal welfare and that is why we continue to call for an end to non-stun slaughter which unnecessarily compromises welfare at the time of slaughter.

“We are pleased that the new figures will help to ensure the debate takes place with all of the facts.”

ARTICLE TWO – RESPONSE TO PREVIOUS ARTICLE ON MIS-STUNNING OF ANIMALS

This is not the first time the BVA have stolen the headlines by stating inaccurate facts. This leads one to think that they are either clueless or incompetent, which is a dangerous situation when the public assume and expect they are professionals with integrity within their field. One would expect an independent, impartial and objective stance on all slaughter methods from the BVA. However, there has been no evidence of this but a targeted focus opposing religious slaughter which incidentally amounts to 2% of halal slaughter in the UK (feeding 4.8% Muslim population, UK). No public acknowledgment of widely known and accepted methods employed in animal husbandry that are known to be painful. No attempts to objectively work towards improving all slaughter methods period. It’s no wonder when you learn this about the BVA you question their motives.

The BVA understanding of statistics is lamentable. The data they used came from http://www.publications.parliament.uk/pa/cm201314/cmhansrd/cm140324/text/140324w0005.htm#14032581000879,  see middle of page. This was in response to Neil Parish’s question on mis-cuts and mis-stuns. Neil Parish himself is chair of both the Associate Parliamentary Group for Animal Welfare http://www.neilparish.co.uk/campaigns/animal-welfare and the Beef & Lamb All-Party Parliamentary Group http://www.publications.parliament.uk/pa/cm/cmallparty/register/beef-and-lamb.htm and is openly and staunchly opposed to slaughter-without-stunning.

Firstly, the reported statistics – the Food Standard Agency (FSA) themselves say it’s the ‘number of mis-stunning incidents identified & recorded’. It is FALSE to say that in 2013 ONLY 9 cattle, 3 sheep and 3 pigs were mis-stunned! You would have this in ONE abattoir on any given day. The fact is that the FSA’s OV (Official Veterinarian in each abattoir independently deployed by the Food Standards Agency) DO NOT ROUTINELY COLLECT data on this – they only do spot checks and mis-stuns may be collected as part of other observations. BVA leadership would have known this if they had bothered to consult their industry members. Instead they have gleefully pounced on such poor data that demonstrates their incompetence, unscientific bias and political meddling.

Equally it does not help the religious community if a blatantly exaggerated mis-stun figure is regularly quoted – that will be used to undermine the legitimacy of other valid arguments. The true mis-stun figure is likely to be around the 5% mark, which is in line with Temple Grandin’s target, but there will be variations between stunning methods, species, staff competency, equipment and resources.

If the BVA really want to know the TRUE mis-stun figure then they would lobby for their OV’s to have control over mis-stun data collection & integrity by proposing the following controls.

– Captive-bolt: Having OV’s issue out bullets for the captive-bolt guns. They can compare the bullets issued against the cattle slaughtered, allowing for any maintenance testing of the Captive-bolt, and then work out a mis-stun ratio.

– Electric head-only stunning: Having OV’s review head-only electrical stunning equipment data to review stuns carried out versus sheep slaughtered. This requires investment in equipment & reporting capability but EU regulation 1099/2009 requires this to be in place by Dec 2019.

– Waterbath stunning: Having OV’s deploy a slow-motion camera at the exit of poultry stun baths which can monitor and automatically record birds which show signs of consciousness and translate that into a mis-stun percentage.

Such controls would allow them to have a PRECISE record of all mis-stuns and not just rely on spot checks when operators are ‘on their best behaviour’.

It has been noted that this time it wasn’t Mr Blackwell but Mr Hargreaves, the current president who has made some blatantly FALSE statements

– “Each incident is recorded,….” Rubbish. If a mis-stun occurs the operative takes correct action and re-stuns the animal until they get it right, WITHOUT making a record. Records may be taken during spot-checks by the OV or Plant Management.

– “We are pleased that the new figures will help to ensure the debate takes place with all of the facts”. He is completely clueless about how the data is collected and who records what and what the data actually shows. The data presented is meaningless as it can’t be statistically validated.
The BVA pounce on statistics for their own cause without regard for verifying the facts which is deplorable for anyone claiming to a profession that the public would expect to trust.

We would like to thank contributors to this article that come from the meat slaughter industry who know from first hand knowledge of practices within the industry.  This article is to highlight the biased and unfair reporting in the media to scaremonger and deliberately mislead readers.