A ‘Demonstration of Life’ (DoL) protocol designed to give Muslim consumers confidence that animals subject to head-only electrical stunning meet the religious requirements for halal meat has been launched.

The move, the result of a partnership between Muslim groups and policymakers, working alongside the farming industry, follows years of behind-the-scenes work (VR, 3 August 2019, vol 185, p 120) and is supported by the Animal Welfare Committee, which advises Defra. 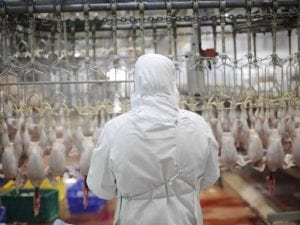 The protocol is designed to prove that small ruminant animals that are rendered unconscious and insensible to pain via effective head-only electrical stunning before slaughter are not killed by the stun itself – thereby qualifying them as halal.

It is intended to underpin a voluntary assurance scheme that halal organisations can opt into – a system similar to one that operates in New Zealand and which supports that country’s sheep meat exports to Muslim-majority countries.

The Agriculture and Horticulture Development Board estimates the global trade in halal meat is worth around £550 billion and is set to double in the next 30 years. The farming sector considers Asia and the Middle East to be regions where demand for UK halal sheep meat exports is likely set to grow.

Currently, the use of stunning before slaughter is not universally supported by UK halal certifiers. However, certain forms of stunning are widely accepted in many Muslim-majority countries, such as the United Arab Emirates, Malaysia and Indonesia.

Lord Trees, a crossbench peer, and Awal Fuseini, an academic and halal slaughter expert, have been instrumental in helping to convene stakeholders on the issue.

Lord Trees, who serves as chief veterinary adviser to Vet Record, said the protocol ‘will give assurance to halal consumers in the UK and worldwide that sheep – and goats – stunned by the defined protocol fulfil the religious requirements of halal, namely that an animal be alive, albeit in this case unconscious, at the time of killing.’

He added: ‘This will literally be demonstrable to specialist, relevant observers in abattoirs which voluntarily join the scheme, using a very limited number of animals, with partial recovery allowed, after a recoverable stun, to rhythmic breathing and/or a detectable heartbeat, but not to consciousness.’

Fuseini told Vet Record:
‘Muslims who accept stunning want assurance that animals were alive at the point of [the neck cut and] bleeding, so such a system will demonstrate to proponents of halal stunning that the system we use in the UK – which is head-only electrical stunning – does not cause instantaneous death of animals.

‘It will definitely inform the debate on whether stunning is compatible with halal or not. I published a paper showing that Islamic scholars were of the view that if someone can demonstrate to them that stunning doesn’t kill, they will be more receptive to the idea.

‘The DoL protocol has been a collaborative effort at developing a protocol that was acceptable to all. It’s been a success for collaboration between industry and certifiers.’

Amir Masoom, from the HFA, called the launch of the protocol ‘very welcome’. He said it would help give reassurance to Muslim consumers around the world that sheep meat products from the UK where stunning had been used before slaughter were authentically halal.

The DoL protocol and the scheme it underpins relate solely to halal, not kosher, meat?– and only to sheep and goats.