The rising tide of Islamophobia in the UK, stoked by the mainstream media, poses a direct threat to the country’s $190 billion tourism economy and Muslim investment in Britain, experts warn.

The United Kingdom is currently one of the most popular global destinations for Muslim travellers, while Gulf investors have lavished billions of dollars on prime London real estate and stakes in key British businesses.

But some warn that the UK stands to lose this favored status due to a rise in Islamophobic sentiment, public support for anti-Muslim right-wing groups, soaring hate crime figures and antagonistic media coverage.

One U.S.-based academic, who studies Muslim communities in the West and spent his childhood in the UK, said that Islamophobia in the UK is no longer confined to extreme neo-fascist groups – and was actually becoming part of the ‘establishment.’

Saeed Khan – lecturer in the Department of Near East & Asian Studies at Wayne State University in Detroit, Michigan, where he teaches Islamic and Middle East History, Islamic Civilizations and History of Islamic Political Thought – said this stands to impact tourism and investment.

“Islamophobia is no longer confined to just these fringe elements. We find politicians, opinion-makers and journalists who are not simply doing the bidding of these fringe groups, but in many ways are championing their rhetoric in demonizing Muslims,” Khan told Al Arabiya News. “That’s deeply disturbing and it will have an impact.”

He said a recent article in The Telegraph was “redolent of the screed advanced by some politicians and public voices in the U.S., that the governments of each respective country are infiltrated by Muslim extremists.”

The article, he said, “cast a rather wide net across a whole cadre of British Muslims actively engaged with the UK government but implying that they are either disloyal or have some hidden agenda that might facilitate extremism.”

Similarly, he said, a recent article in The Times “placed an unreasonable onus on Muslims to “flush out” killers and extremists, suggesting they have some capability that the UK government does not possess or worse, that they are purposely avoiding doing so because they are somehow sympathetic to the extremist agenda.”

Khan said there has “always been a latent Islamophobia” in the UK, but said economic concerns, fears over the future of Europe, as well as the rise of the so-called Islamic State of Iraq and Syria (ISIS) and the attacks on the Charlie Hebdo offices in Paris have all contributed to the recent upsurge.

Rising Islamophobia poses a threat even to investment from Gulf states such as Qatar, which has bought up several prime areas of London and high-profile buildings such as The Shard skyscraper, Khan added.

“Those kinds of investments are going to be at risk if people feel as though England is now becoming a hostile environment,” said Khan.

“The Gulf Arabs have always felt a natural affinity toward the British… But we’re no longer in 1971 and as that generation is starting to wane, new generations are coming up who don’t have that sense of cultural affinity or natural bond. So for them the issues of investment and affinity are much more negotiable.”

Massoud Shadjareh, chair of the Islamic Human Rights Commission, a London-based advocacy group, agreed that both tourism and investment are at risk.

“People don’t normally want to go somewhere they are not wanted,” he said.

Shadjareh said hate crime against Muslims is at “unprecedented” levels in the UK, with what gets reported to the authorities representing just the “tip of the iceberg”.

That could see a dip in both investment and tourism from the Muslim world, Shadjareh warned.

Individuals and smaller investors in property could be particularly affected by the negative sentiment in the country, he said.

“People make investments when they feel secure,” he said. “When you see these abuses, it’s going to have an impact on your decision.”

The UK has seen soaring levels of hate crimes across categories including race, religion and sexual orientation. In England and Wales there were a total of 46,919 hate-crime offences in the 12 months to April 2014, compared to 43,927 the preceding year.

An anti-Islamic mood has been spreading across Europe, with Muslim communities particularly wary following the attack in January on the Charlie Hebdo offices in Paris.

The far-right Germany group Pegida – which is against the so-called “Islamisation of the West” – held its first UK demonstration in February, although the reported 375 supporters were far outnumbered by the 2,000 to 3,000 who assembled to oppose the group.

An estimated 1.3 million Muslim travellers visited the UK in 2014, making the country the third most popular among the non-Organisation of Islamic Cooperation states, according to the MasterCard-CrescentRating Global Muslim Travel Index 2015, published earlier this month.

But other commentators said tourism numbers may be hit due to news of rising Islamophobia and hate crimes in the UK.

Rafi-uddin Shikoh, the New York-based chief executive and managing director of DinarStandard, a research and advisory firm that covers Muslim tourism and Islamic finance, made a parallel with the decline in Muslim tourism to the United States after 9/11.

While the UK, and especially London remains a popular destination among Muslim travelers, perceptions of negative sentiment against Islam and hate crimes could have an impact, said Shikoh.

“It certainly weighs into their decision, thinking whether their wives and daughters will be harassed,” he said. “If these stories of hate crimes are sustained… I believe it will have an impact on tourism.”

Visit Britain, the UK’s national tourism agency, did not respond to a request for comment on the issue. But Anas Kasak, chief marketing officer at CrescentRating – a specialist in ‘halal travel’ – said he expects the UK to remain a very popular destination. “The Muslim travel sector will continue to grow as long as the economy continues to grow,” he told Al Arabiya News. 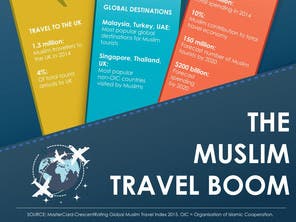 Talha Ahmad, chair of the membership committee at the Muslim Council of Britain (MCB), said that rising Islamophobia would certainly not help attract tourists to the UK, but he does not see it having a big impact.

“Although Islamophobia is on the rise, I’m proud to be British and I feel very safe here,” he said. “There is a growing number of affluent Muslims in Britain. And the Muslim community certainly gives Britain an advantage in terms of attracting investment and tourism.”

That is despite the often negative UK media coverage concerning Muslims, he added.

“There is a whole body of evidence to suggest that Islamophobia is on the rise, and that the media is feeding that,” Ahmad said.

He pointed to the recent scandals involving ‘Muslim grooming gangs’, in which groups of men in areas such as Rotherham, Derby, Bristol and Oxfordshire were accused of raping thousands of children.

Mr Ahmad said that linking such a story to the Muslim faith was not fair. “I don’t see how the perpetrators’ religious faith is relevant, unless they were using their faith as a cover,” he said.

However, in some instances religion did come into the story, given that some politicians blamed “institutionalized political correctness” – a reluctance held by authorities to challenge those in ethnic communities – as being one factor behind why the horrific child abuse in Rotherham was not exposed earlier.

Shikoh agreed that the press has played a part in perpetrating negative perceptions about Islam. He pointed to the mainstream media’s widespread use of the phrase “Islamic State” to describe the extremist rebel group, which he said panders to their cause.

“That is a prime example of the unfairness. When everyone’s screaming, ‘they are not Islamic, they don’t represent Muslims’… why call them the Islamic State?,” he told Al Arabiya News.

“If a pedophile says ‘call me a good child Samaritan’, you’re not going to. You’d call them a criminal. So if someone is doing horrific things and says ‘please call us the noble people of the Islamic State’, why would you do that?”