A Scottish sweet manufacturer is seeing sales of its fudge and toffee surge in Iraq. What’s feeding that growing popularity? 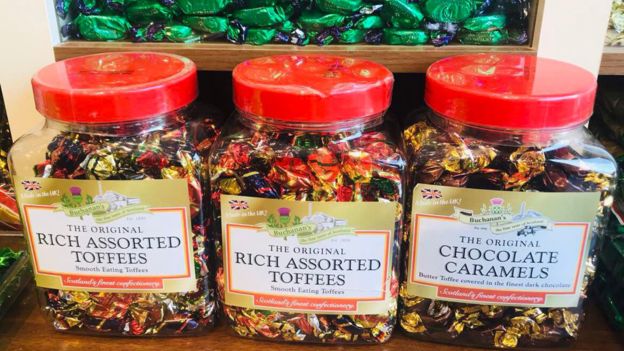 In northern Iraq, shops are rushing to fill their shelves with sweets. The Islamic holiday of Eid al-Adha, or Festival of the Sacrifice, is approaching – and it is an important part of the year for confectionery businesses.

In Iraqi Kurdistan, as elsewhere, the four-day festival which starts on Sunday is a time for celebration and feasting – and sweets are very much on the menu.

That’s good news for Sulaymaniyah-based businessman Farhad Haseb, who sells confectionery to upmarket stores in Erbil and Dohuk, as well as other towns and cities in the region.

“In our culture, everyone buys very sweet things to give to their guests when they are visiting their homes,” he says.

“Toffee is a very popular choice for Kurdish people, especially at Ramadan and Eid.”

And families across Iraqi Kurdistan will be tucking into sweets that have been made 2,600 miles away in Scotland.

Greenock-based confectioner Golden Casket, which is probably best known in the UK for its Millions brand, is one of Mr Haseb’s main international suppliers.

He first linked up with the Scottish company several years ago at a confectionery trade show, and has been ordering increasing amounts of its Halal-certified fudge, chocolate eclairs and assorted toffees each year.

The family-owned firm produces about 70 tonnes of toffees, boilings, fudges, chocolates and chews a week.

So far this year, it has sent more than 60 tonnes of its Buchanan’s brand sweets to the region.

So what’s behind the success of Scottish toffee in Iraqi Kurdistan?

“In our culture, eclairs and butter toffees are very popular,” says Mr Haseb.

“We buy them from Belgium and Poland but Scottish toffee is the best – it is more chewy. We are selling more and more each year.”

Mr Haseb, whose company Arak Garden imports more than 200 tonnes of toffee and chocolate a year, expects to place more orders with Golden Casket this year.

The Scottish company, which is also known in the UK for its “One Pounders” bags, has been making adjustments to cater for the growing Iraqi market.

The company has also been paying close attention to the packaging of products for the Iraqi market.

Sales manager Stuart Rae explains: “Each jar of toffee or fudge has got to be gold wrapped – gold being a sign of quality – and it has to be made in the UK.

“That’s the high-end stuff for the Kurdish market in Iraq.”

He says: “We exhibited in Dubai for the first time in November – that’s an emerging market and one that we want to break into, and export is certainly a growth potential for us.”

The Kurdish link is a welcome one for Golden Casket, especially as the general confectionary market in the UK remains relatively flat at the moment.

However, Golden Casket is not the only Scottish food and drink firm to identify Iraq as a potentially lucrative market.

Earlier this year, Tunnock’s – which has been exporting to the Middle East for more than 50 years – sent its first shipment of Caramel Wafers and Caramel Logs to the country.

Sales director Fergus Loudon said: “Iraq is a relatively new market for Tunnock’s. The initial feedback has been very positive, with the distributor there ready to place the next order.

“It’s obviously an emerging market, but we hope that some day soon Tunnock’s biscuits will be as popular in Iraq as they are in other countries across the Middle East.”