Following up on the Sun’s story yesterday about Pizza Express chicken being “secretly” halal (the detail is listed on the website and not on the menu), the Daily Mail has reheated a 3-year-old story that “millions” are unknowingly buying the ritually slaughtered meat.

The article claims that more than “70% of all New Zealand lamb in supermarkets is from halal abattoirs”.

One of its main gripes is as follows:

51% of the lamb, 31% of chicken, and 7% of the beef slaughtered in this country – from a total of 16m animals per week – is now ‘religiously killed’, according to the FSA.

That’s far more than the Muslim community, which constitutes around five percent of Britain’s population, can possibly consume.

If that’s the case then why is so much halal meat being produced?

What is halal meat?

Firstly, we need to run through exactly what halal is. Translating as “lawful” or “permitted” in Arabic, halal is only applied to meat that is slaughtered in methods that comply with Islamic law.

The animal must be healthy before it is killed and all blood must be drained from the body – to this end the jugular vein of the animal is cut with a sharp knife. A prayer must be said as the animal is killed.

Within Islam there is some debate about how strictly these rules have to be adhered to. One of these is whether the animal is stunned prior to slaughter. Animal welfare groups such as the RSPCA believe that not doing so causes unnecessary suffering.

Denmark, Sweden, Switzerland, Norway and Iceland all ban slaughter without stunning but the UK has refused pressure to follow suit.

However, only a small minority of halal abattoirs in the country slaughter without the animal being stunned beforehand. The RSPCA said it estimated that 88% of animals killed for halal meat were stunned before slaughter.

Halal meat’s prevalence in the UK

The Daily Mail is correct to say that 51% of lamb produced in this country is outsizes the 4.8% of the population that is Muslim. However, there are a couple of issues with that statistic.

Firstly, Islamic people eat a disproportionate amount of lamb. According to a 2010 report by industry body Eblex, Muslims account for 20% of lamb consumption in England.

Eblex said in 2010 that the halal meat market is a “multi-million pound contributor to the British economy”. The same Eblex study has some relatively surprising stats on Islamic halal consumers in England. The report identifies the following trend:

The attempt by some of the major supermarkets to expand into the halal market brought mixed views from the abattoirs interviewed: some think this is the inevitable future for the industry, while others feel supermarkets will not be able to gain a strong foothold in the market because Muslim consumers are wedded to using small, local, Muslim-run butcher shops.

The Islamic consumers surveyed were asked to rank a number of issues on a scale of importance between one and five, with five being the most important.

When asked about how they make sure that meat is halal, “It is important that the butcher is Muslim” scored the highest at 4.3.

The Daily Mail has established that much of the New Zealand lamb sold in some supermarkets is not labelled as such. A majority of the people Eblex asked would look for the logos to be predominantly displayed if they were going to buy it.

It’s pretty much clear that the unlabelled meat is not really for Islamic consumers so why is it there?

Why is there so much halal meat?

One possible answer is contained in the Daily Mail’s article, when it quotes a spokesman from Compassion in World Farming:

With ever-larger abattoirs now exporting meat to wider and wider markets, it has become simpler and more cost effective for many of them to subject all their animals to halal slaughter.

We also have to note yet again that the vast majority of supermarket-sold halal meat is stunned before slaughter, which complies with EU regulations.

On a commercial level it makes no sense to have halal and non-halal production lines when there is such a sizeable proportion of your consumers that care one way and few who care the other way.

Tesco said the majority of exported New Zealand lamb followed Islamic slaughter traditions because of how much was being sold in the Middle East. Expect more of this as suppliers try to reach wider and wider markets. 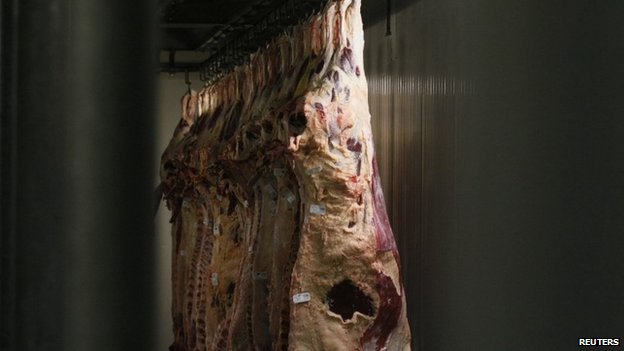 Faith leaders have called for clearer packaging after it emerged some meat is sold in the UK which could qualify as halal but is not labelled as such.

Retailers say the animals are stunned before slaughter and the only difference from standard meat is that they are blessed as they are killed.

In a letter to the Daily Telegraph, Jewish and Muslim leaders called for “comprehensive labelling”.

The government said it wanted people to be able to make informed choices.

Islamic law states that the animal must be uninjured before slaughter but some authorities allow a form of stunning.

Marks and Spencer, Tesco, Morrisons, Waitrose and the Co-op said their New Zealand lamb is slaughtered to halal standards, while Pizza Express has already revealed their chicken is killed according to Islamic tradition.

All say animals are stunned before slaughter and the animals are killed in accordance with Halal principles so meat can be sold to both Muslim and non-Muslim countries.

Tesco, along with the Co-op, said all the animals were stunned before slaughter with the only difference being that halal meat was blessed as it was killed.

Tesco said that because it does not specify this is done “it would be misleading for all customers to label the meat as halal”.

Waitrose said some of their lamb is slaughtered after a halal blessing, which “minimises food waste, keeps prices down for our customers and helps our farmers to be competitive”.

A spokeswoman for Marks and Spencer confirmed all its New Zealand lamb is halal. It said the meat is not labelled as halal, but added that “very strict, animal welfare policies” are applied to all its products.

Morrisons meanwhile said a “small number of processed meat products may contain meat that is blessed but added that “it is always pre-stunned”.

In order for meat to qualify as kosher under Jewish law, an animal must be healthy and uninjured before it is killed by a single cut to the neck with a razor-sharp knife, a practice known as shechita.

In the letter to the Telegraph, Henry Grunwald, chairman of Shechita UK, which represents the Jewish method of religious slaughter, and Dr Shuja Shafi, deputy secretary general for the Muslim Council of Britain, called for clear labelling of products.

They wrote: “Consumers should be informed whether an animal has been mechanically stunned before being slaughtered and whether it has endured repeat stuns if the first attempt was ineffective.

“They should also be told the method of slaughter: captive bolt shooting, gassing, electrocution, drowning, trapping, clubbing or any of the other approved methods.

“Comprehensive labelling should be supported by faith communities and animal welfare groups alike.”

Stunning of livestock was introduced in England in 1929 and has been mandatory in the the EU since 1979, although member states can grant exemptions to satisfy the dietary requirements of Jews and Muslims.

Andrew Opie, director of food and sustainability for the British Retail Consortium said: “All our members have confirmed all their own brand fresh meat is from animals that have been pre-stunned before slaughter.

“Some of our members do sell branded halal and kosher certified meat produced by specialist companies and clearly labelled.

“As the overwhelming majority of meat sold in UK supermarkets is own brand and from animals that have been stunned prior to slaughter we do not see the requirement to separately label meat based on the method of slaughter.”

The Department for Environment, Food and Rural Affairs said it had contributed to an EU study into the compulsory labelling of halal and kosher meat and planned to review options for the UK once this is finalised in the summer.

“We want people to have the information they need to make informed choices about the food they buy,” a spokesman said.

He added: “There are strict laws in place to ensure welfare standards are met during slaughter.

“Although we would prefer animals to be stunned before slaughter, we respect the rights of Jewish and Muslim communities to eat meat in accordance with their beliefs.

“The government has no intention of banning religious slaughter.”

Philip Lymbery, chief executive of Compassion in World Farming, said the UK should ban the slaughter of animals which have not been stunned, but he added: “I absolutely think labelling is a great way to go as an interim step.”