LONDON: Muslims are expected to replace Jews as the second largest religious group in the US after Christians by 2040, 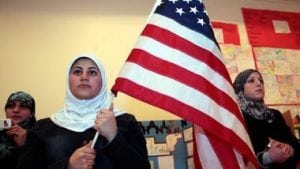 according to a new study.

There were 3.45 million Muslims living in the US in 2017, and Muslims made up about 1.1 percent of the total US population, said the report from US think tank Pew Research Centre (PRC).

“Muslims in the US are not as numerous as the number of Americans who identify as Jewish by religion, according to our estimate,” however the US Muslim population will grow “much faster” than the country’s Jewish population, it said.

In 2007, when the study was first conducted by PRC, the body estimated that there were 2.35 million Muslims in the US By 2011, the number of Muslims had grown to 2.75 million.

Since then, the Muslim population has continued to grow at a rate of roughly 100,000 per year, driven both by higher fertility rates among Muslim Americans as well as the continued migration of Muslims to the US.

Scott Lucas, professor of American Studies at the Department of Political Science and International Studies, University of Birmingham, told Arab News he believed the Muslim community in the US is “thriving,” particularly in major cities such as New York, Minneapolis and Detroit.

Lucas said: “Some might find these statistics of interest because of the tensions raised around Islamophobia and the anti-Muslim rhetoric that is whipped up by some leaders and some media outlets, but it’s important to emphasize that Muslims are very much a part of America, they are us and we are them. Muslims practice their faith just as many others practice their faith. The media has created an artificial division.”

Lucas added that despite the rhetoric espoused by US President Trump and the resultant rise in US hate crimes, “the day-to-day reality of Muslims remains one largely of inclusion and going about their daily lives as we all do.”

The professor added that, in parallel with the growing Muslim population in the US, he expected to see the erection of more mosques and the creation of more halal products and services. He added: “However, remember not all Muslims practice their faith by the book, just as not all Jews eat kosher food. People practice their faith in different ways.”

Haroon Latif, director of insights at New York-based research firm Dinar Standard, also predicted an impending spike in demand for halal products in the US.

Latif told Arab News: “The rapid growth of the US Muslim population has substantial implications for business. Muslims are a lucrative consumer segment with an aggregate disposable income of $107 billion in 2015.

“They (Muslims) are tied together by common values and companies are beginning to respond, from halal food to lifestyle products and services, spanning fashion, travel, and financial services.

“US-based companies will increasingly clamor to market to and capture the loyalty of Muslim consumers at home and abroad,” he said.