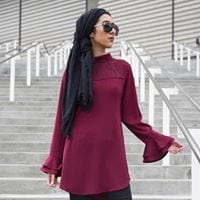 Long-sleeved ruffled shirts, wide-leg jumpsuits and an assortment of hijabs — all creations of Orlando resident Lisa Vogl — now are featured at Macy’s as part of the company’s first modest clothing line for women.

To shoppers, they’re just clothes, but to Vogl they’re solutions.

Vogl, 35, is a practicing Muslim who chooses to dress conservatively as part of her faith. She said she often had to visit different stores in hopes of finding the right styles to layer to suit the modest tastes she preferred. Rather than wait around for someone to fulfill her clothing needs, Vogl, along with Verona Collection co-founder Alaa Ammuss, launched the clothing line in 2015 at an Orlando boutique.

“There are millions of Muslim women here in the U.S., and there’s a lack of clothing that would work to meet our religious requirements as well as be fashionable and affordable at the same time,” she said. The clothes appeal to any woman seeking modest attire.

While the feedback at Macy’s has been largely positive, not everyone gave the product line a warm reception. Some took to social media to vent their frustrations.

One Twitter user called for a boycott of Macy’s, writing, “And Stupid #Macy’s stores adds the oppressive islamic Hijab as a new fashion statement. ARE U KIDDING? While other women are being murdered over trying to NOT WEAR IT??? @Macys has gone MAD!”

Another user wrote on Twitter, “this makes me sick. #Macy’s CLUELESS of what’s going on in #Iran and women’s rights there. Shame on you @Macys Women in Iran DON’T want to wear the #hijab. Its a symbol of oppression to them.”

Vogl countered that wearing the Muslim head covering was a matter of choice and said that people often misunderstand the reasoning behind it. Islam itself also is widely misunderstood.

“People of other faiths might think there are a lot of differences, but in fact, we’re a lot more alike than you would think,” she said. “I’m blessed to be in a country where I can practice my religion freely.”

Vogl’s venture with Macy’s began after she attended a women- and minority-focused business-development workshop the company held in New York in 2017. After seeing that there was a viable market for women’s modest clothing, Macy’s offered a deal.

“Through the workshop at Macy’s, the founder of Verona Collection, Lisa Vogl, shared her vision to create a 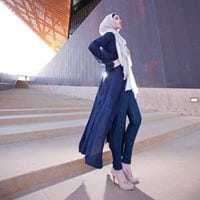 “For us, for my community, this is a very big deal,” Vogl said. “I think more so talking about us being able to be represented, and Macy’s took a very huge step of inclusivity and we’re very really thankful to be partnered with a company that values diversity.”

While launching any business poses risk, the venture is Vogl’s second. She’s also been a nationally ranked college softball player, an English teacher and a photographer, a skill she studied at Daytona State College.

“I’ve never been a person that does things that are the status quo,” Vogl said. “I’ve always been a risk-taker.”

“She was an outstanding student,” Biferie said. “I remember her being bright, articulate, and creative.”

Vogl left DSC one class shy of graduation to start her own photography business.

“I didn’t know if I had any talent,” Vogl said. “I sometimes just jump into things and then go full force.”

She found success as a fashion photographer and traveled extensively, with her work being featured in a number of national publications. Her achievements came as no surprise to Biferie. “I felt that she was going to be successful with whatever she pursued.”

Despite her string of recent successes, Vogl said she has no plans to rest on her laurels.

“Fashion evolves. You always have to stay ahead of the game.”