Albany’s Central Avenue corridor is the heartbeat of the region. Everything enters here, everything emanates from here. To see how Albany and the greater Capital Region (of New York state) are changing, look to the shops and restaurants that bring life to the staid brick buildings that line Central Avenue and its side streets. 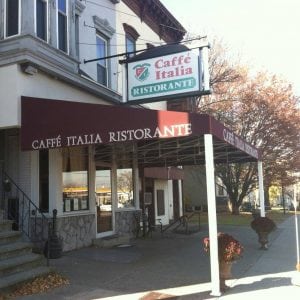 Caffe Italia, bedecked in a hazy Venetian blue, harkens to a time when Italian immigration swept through the Capital Region. Chester’s Smokehouse, which opened in mid-2015, is a reminder of the German and Eastern European fare that was brought over by immigrants as a taste of home. For a moment, a Burmese restaurant (Shwe Mandalay, now closed) demonstrated the presence of Burmese immigrants, many coming to America and the Capital Region as refugees.

The cultural landscape of Central Avenue looks a bit different today than it did at the peak of immigration during the late 1800s and well into the 20th century. Mexican and Caribbean food is copious, with authentic Oaxacan huaraches a stone’s throw from Jamaican beef patties and ”mannish water.” Old-style Italian pizzerias are a block away from an extensive Japanese market, ramen shop and African grocery.

Within the last two years, however, many restaurants and stores have changed hands into halal-certified eateries and purveyors. Five halal restaurants and markets exist on the 200 and 300 blocks of Central Avenue, with additional offshoots on North Manning Boulevard and Ontario Street.

According to Zabihah.com, which hails itself as, “the original and world’s largest guide to halal restaurants and markets,” there are 40 halal restaurants, 13 halal markets, and 25 halal caterers in the immediate Capital Region, not including halal offerings found at traditional chain grocery stores like Whole Foods and Price Rite in Schenectady.

Halal is an Arabic term for “permissible” and denotes acceptable means of food preparation for followers of Islam. (It is akin to kosher, with its religious tones and strict regulations.) Most people who are familiar with halal guidelines know it for its application to meat, which requires that an animal be humanely raised and slaughtered practices.

Certain species — notably swine but also animals that are carnivorous and have fangs and claws (like tigers) — cannot be slaughtered and consumed under halal guidelines, but halal extends beyond this. Plants used as food must also be grown and processed in mindful, clean ways; the harvest, storage, preparation and packaging of food must be done with sanitation and cleanliness as a top priority.

The surge in halal food can be attributed to the rise of the Muslim population in America. The Pew Research Center counts 3.35 million Muslims in the U.S. While Muslims have long been part of life in America, an increase in immigration to the U.S. occurred in the late 1970s and into the 1980s.

Currently, 58 percent of U.S. Muslims are first-generation Americans. While Muslims only account for 1 percent of the total U.S. population, 3 percent of New York state’s population is Muslim. City-Data.com reports that 4,567 Muslims lived in Albany County in 2010, up from 659 in 2000.

Sohaib Chekima, principal of Annur Islamic School in Schenectady, said Muslims are moving from New York City to Albany for a better quality of life and finds that “Albany is the hub,” because of the existing community here and access to public transport. With increased socioeconomic mobility, many Muslims are moving to suburban areas like Latham and Clifton Park.

Not all Muslims follow a halal lifestyle, though. Fazana Saleem-Ismail, chair of the community outreach committee for Capital Region Coalition Against Islamophobia, says, “There are many interpretations of what it means to ‘keep halal.’ Some believe that if you eat meat prepared by people ‘of the book’ [Christians or Jews], that’s OK. Others only eat food that is labeled ‘halal’ or ‘kosher.’ Still others only eat ‘halal’-labeled food. Some Muslims do not keep halal at all.”

Chekima agrees with the “of the book” slaughter and preparation of meat, but notes that because of increased cost to raise (better food, more room to roam), slaughter (increased human interaction) and certify the livestock and subsequent meat, the price of the meat is automatically more expensive. “Halal meat is not out of reach for those considered low-income. It’s not a luxury, but it’s not something they can have all the time,” he says, and notes that while halal-certified fast food is increasing (he notes Elevation Burger, with a location in Latham), “if money is a factor, it just depends on how strict they are.”

Uzma Popal doesn’t think money should prevent people from eating halal. As director of the Muslim Soup Kitchen Project, she serves only halal-certified food to anyone who comes through her program for a meal. The Muslim Soup Kitchen Project recently donated a freezer to Unity House in Troy — a partner in the soup kitchen project — to store halal meat, which can be prepared by and served to anyone.

“Halal and charity go hand-in-hand. There are many ways to give charity,” she says, and while halal-certified food (which includes packaged foods as well) is more expensive, there are halal markets that assist in meeting needs. Lower-cost halal meat can be found at Restaurant Depot in Albany.

Halal food as its own cuisine

Many commonly refer to Mediterranean and Middle Eastern cuisine as “halal food,” but that is a bit of a misnomer. Part of the problem comes from the use of the word “halal” as part of naming conventions. Street food carts in New York City have become predominantly halal-focused in recent decades (a study from Queens College says the trend began in 1990) and many of them included the word “halal” in their business names. The Halal Guys were the most visible among that grouping, with bright yellow awnings and shirts that boldly included the word “halal.” The cuisine was primarily composed of rice, marinated meat kebabs, and chopped salad with thick white dressing. It became the touchstone of what halal food tasted like.

But other cuisines are also classified as halal. Chekima notes halal taco stands he encountered in Florida, and locally, restaurants like Minar in Troy (Indian cuisine) and Slavonian European Cafe in Albany (Eastern European cuisine) are also halal-focused. Zaitoon Kitchen, in Latham, is halal-focused, and relies on the owner’s Afghan heritage to dictate the menu (when visiting the restaurant’s website, it has three adjectives describing its food: “Cage-free, veggie-fed, halal,” and also includes a halal certification seal on its menu page). Still, Halal Palace in Troy and the Halal Shack, located on the University at Albany campus, concentrate on the standards of those New York City street food carts.

“By definition, when you say Indian or Pakistani, it’s because the people serving the food are from those areas, but halal should never mean anything but the religious guidelines,” says Chekima.

The halal-certified category has grown by more than one-third since 2010, with sales of halal food topping $20 billion in 2016, according to a report from Bloomberg. The report states that Whole Foods has witnessed double-digit growth percentages since 2011.

Those numbers aren’t supported by Muslims alone. Since halal food — especially meat — follows the same practices as humanely raised or harvested and organic meat, many concerned eaters seek out halal certification in their food decisions.

The future of halal

The Pew Research Center predicts that the Muslim population will grow more than twice as fast as the general world population through 2060, likely surpassing Christians as the largest religious group by population, to total 3 billion Muslims. Those figures will be mirrored in the U.S., leading more restaurants and markets to offer halal options in order to capitalize on the market.

Jamal Rasoully, owner of the Halal Shack and Spin Sauce (a company based in the Capital Region that makes halal-certified condiments, including the white sauce popular at halal food carts) says that it’s all about opportunity, and more Muslims will seize the chance to serve their community.

“I think as the population grows, the demand increases and, as we discussed, more individuals are better equipped to meet the demands,” he says.

“A number of community members looking in business and being aggressive in this opportunity. Business is in the tradition of the Prophet. He was a businessman, and a large number of his followers had their own businesses. Religion encourages independence and making one’s own income,” says Chekima.

Popal says that visitors to her soup kitchen meals tell her that halal food tends to taste better, and she believes it’s a result of how the food is prepared and the demand on quality necessary to meet halal standards. As more people explore halal-certified foods, the trend will likely flourish and spread to the outer reaches of the Capital Region.

Until then, Central Avenue shows no sign of losing its halal culture, though there is always a seat at the table for the next cuisine to come