Skip to content
The same federal judge who took criticism from around the country for her involvement in bringing down a large Iowa Kosher meat company five years ago is now scheduled to preside over a criminal trial involving the founder of a major Halal food production and distribution company.

U.S. District Judge Linda R. Reade is slated to take over the case of U.S. v. William B. Aossey Jr., the 73-year-old Cedar Rapids businessman who founded Iowa’s Midamar Corporation, which produces and distributes Halal food worldwide. As is often the case in federal courts, a magistrate is hearing the defendant’s preliminary court appearances. 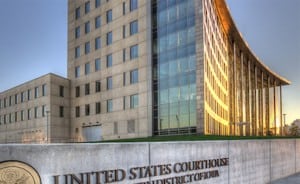 The first appearance in the case took place on Oct. 30 and was presided over by Chief U.S. Magistrate Jon S. Scoles for the Northern District of Iowa. Scoles registered Aossey’s pleas of “not guilty” on all 19 charges contained in an indictment unsealed on Oct. 23. Aossey was arraigned, but has not been detained. He remains free with the only significant pre-trial restriction being a requirement to provide 48 hours notice before any international travel. Scoles will also take the status hearing, scheduled for noon on Dec. 3.

Then, according to the trial management order, the trial will commence at 9 a.m. on Dec. 29 before the Chief Judge for the U.S. District Court for the Northern District of Iowa, Linda R. Reade.

Reade was the judge whose role in the 2008 raid of Agriprocessors Inc. kosher slaughterhouse in Postville, Iowa, and the subsequent conviction of CEO Sholom Rubashkin trial for bank fraud and related charges, became subjects for a white hot controversy within the federal judiciary. When, upon review, the U.S. Court of Appeals for the 8th District in St. Louis found the judge’s actions were acceptable, her critics in 2012 tried by a Writ of Certiorari to get the U.S. Supreme Court to review Reade’s actions.

The high court eventually took a pass even though among those wanting Reade’s actions reviewed were an eclectic mix of former Attorney Generals of the U.S. including Nicholas Katzenbach, Ramsey Clark, Edwin Meese, Richard Thornburgh, William Barr and Janet Reno. All asked the court to review whether Reade’s role in the trial and sentencing was – to steal a phrase –“kosher” after her participation in planning the raid.

Reade’s involvement was not just a one-time appearance from a U.S. district attorney seeking to obtain a warrant, argued her critics. Instead, according to an explanation written in 2011 by Pace Law School professor Bennett L. Gershman and defense attorney Joel Cohen, these meetings with the judge went on for six months before the raid and were frequent, and always held in secret. They depicted some of what occurred as:

The 2008 raid of the plant, located in northern central Iowa, led to the arrest of about 400 immigrant employees with false identity papers by the federal Immigration and Custom Enforcement agents for immigration violations. Authorities also informed Rubashkin at the time that he was the target of an investigation involving both financial and immigration crimes.

He was arrested In November 2008 and went on trial for the financial crime accusations in 2009. After he was convicted, Reade sentenced Rubashkin to 27 years in federal prison, two years more than the prosecution requested. It was after that that the judge’s extensive role in the raid became known. The judge’s conduct in the case eventually came in for questioning by 86 retired federal judges, prosecutors and former attorney generals in addition to 45 Members of Congress who questioned Reade’s conduct in the case.

Citing the separation of powers doctrine, both the White House and the U.S. Department of Justice declined to get involved in the case, and when the Supreme Court passed on it two years ago, the dispute reached an end.

For almost 20 years, the nation’s largest Kosher meatpacking plant at Postville, IA, along with the still-operating Midamar Corporation, a main producer of Halal foods, was a staple of the diverse food landscape in northern central Iowa. Agri Star, also a kosher producer, bought the Postville plant in 2009.

While both doctrines designate standards for the religious slaughter of animals and birds, Muslims and Jews see Halal and Kosher as very distinct practices, though they overlap in some ways. Both prohibit the killing of pigs or predators for food and both instruct that animals be killed using a sharp knife cut to the animal’s throat.

A spokeswoman for Midamar says the company has remained fully operational since its founder’s indictment. She says the company’s directors and employees believe Aossey has been “unfairly singled out and targeted.”