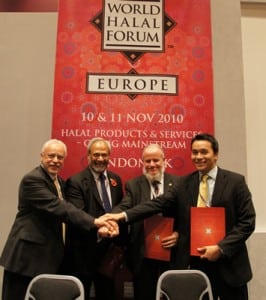 Distinguished principals of government agencies, corporate executives, entrepreneurs, religious community leaders, and consumer advocates met to trade experiences, perspectives, and to network. This conference is one of a larger cluster initiated originally in 2006 by KasehDia of Malaysia. Attendees hailed from the UK, France, Germany, Italy, Belgium, Finland, Brunei, Australia, America, and Malaysia–which has strived to become the World Economic hub for Halal industries.

The global market is 1.83 billion Muslims strong, and is estimated at $2.3 trillion USD. Due to this economic potential, mainstream companies are scrambling to approach Halal consumers, yet there is a call for more education, training, and advocacy on the part of Muslims to guide corporations and develop their own companies toward a professional caliber.

The Forum founder, Hajjah Jumaatun Azmi is also the founder of KasehDia and is Editor of Halal Journal, which is distributed in 35 countries, and has worked to unite this fragmented industry. Co-founder and Director of the World Halal Forum-Europe, Abdalhamid Evans and his wife Salama have spent most of the past decade understanding the development of the Halal market as a new paradigm, and have immersed themselves in the Halal movement to emerge as global experts. They own Imarat Consultants and publish Halal industry news via HalalFocus.com. They have developed an extensive specialist network throughout the Halal industry worldwide.

The Forum team brought a distinguished array of speakers and panelists who illuminated the promise and some of the pitfalls of the Halal industries. Halal industries represented were food, finance, cosmetics and personal care products, pharmaceuticals, travel, and logistics. The speakers gave plenty of information for the attendees to weigh, and experts in the audience also contributed to the panel sessions.

The most volatile topic was that of using electric stunning to quell animals prior to the slaughter process. Presently, there are variations in practice, and research has not been extensive enough to placate animal rights advocates of best practice. A dire need for more public education and research is needed to ascertain that Halal slaughter is hygienic, healthy, and humane. The need to help professionalize, educate, communicate, delineate Standards, audit certifiers, and increase transparency to protect consumers was evident.

Sir Iqbal Sacranie gave the initial keynote address and specified that in the UK no regulatory framework, limited audits for quality, and no official comprehensive training is provided. Also, regulations on imports had minimal Standards.

Muddasser Ahmed, Chief Executive of Unitas Communication, UK, deftly defined the European perception of Halal as cruel to animals, resistant to legislation, and explained that a call for shariah compliance is resulting in negative, hyper-suspicious backlash intimating that Muslims are trying to subversively force Islam on everyone. Obviously, this is in direct opposition to Quranic and Sunnah evidence to be kind and merciful to animals, give fair value and honesty in transactions, and that there should be no compulsion to force Islam upon anyone. Yet, this is the unfortunate reality, especially for Muslim immigrants in many European countries. Muddasser Ahmed proposed that a targeted public affairs campaign, interfaith alliances, films, and reaching out to animal rights lobbyists are solutions to redress these misperceptions.

Philip Pfeffer, Partner at Chadbourne & Park (London), began his lively and rousing session with the accusation that legislatures want to “denormalize religious practice,” which is cited increasingly in secular Europe. He commended the pro-Halal and Kosher research of Dr. Temple Grandin from Colorado State University.  He stated that since the majority of Muslims in the UK are requesting not stunning animals, Muslims should then organize and leverage their collective resources.

The future implications of genetic modification (GM) and cloning were presented by Richard Werran of Cert ID Europe. He gave historical as well as current implications of these sciences and he requested that Muslims need to study genetics, food science, and look toward careers in the field to safeguard our health and welfare.

Dr. Mah Hussain-Gambles, owner of Saaf Pure Skin Care, expressed her motivation to create an eco-ethical line of products after she became aware of the widespread use of alcohol and pork derivatives in many skin care and cosmetic products. She informed the audience that 60% of what is applied to the skin enters the bloodstream. Her interest is in Muslims owning businesses that can provide perfumes, car fresheners, detergents, fabric softeners, hair care, deodorant, house cleaning, hand sanitizing, and baby products.

Dr. Mah was followed by the Secretary of Chemical Company of Malaysia’s Halal Committee, Roziatul Osman. Educating the community in the larger concepts of production and distribution, she has been working to raise awareness of the Halal alternatives to conventional formulations that Muslims have settled for, contrary to preference.

Rafi’uddin Shikoh, founder of Dinar Standard, informed the Forum about the need to focus on small and medium enterprises (SMEs) that need to be nurtured. He cited resistance by some Muslim investors to support Muslim enterprises. Interestingly, he shared that some successful upstarts were funded by non-Muslim investors who—in spite of a slow anticipated return on investment—saw great potential in concepts catering to Muslim markets. He stated that we must invest in our community; when we solve people’s problems, we can expect success.

David Smith, futurist and Chief Executive of Global Futures & Foresight mirrored much of what Mr. Shikoh shared, but he added that many investors do not yet see a track record of success in Muslim owned businesses. They have challenges in growing to larger scales, and that is where Muslims must prove themselves and find investors who “lead for change.”

Travel ratings for “Halal Friendly” companies are the business of Crescentrating.com. Founder Fazal Bahardeen created his business due to the high percentage of Muslim travelers who are seeking this information. He indicated that it is easy to become Halal friendly if one considers simply accommodating Halal food and prayer direction. Further accolades can be given to companies that offer wudu friendly washrooms, Ramadan food service, prayer rooms, and a choice of private recreation facilities, or timings, that consider gender.

Koen De Praetere, General Manager of Belgian poultry producer Volys Star, and Jon Hayes, Chairman of the Australian Meat Industry Council’s Halal Committee, expressed that producing Halal products does cost 5-30% more, so costs need to be reduced and  a bond of trust  be developed between companies and consumers through accreditation. They desire to cater to the needs of Muslim consumers, but were at times frustrated by the conflicting messages and disunity in Muslims’ representatives.

Zahed Amanullah, Managing Director of HalalFire Media, moderated the session and added to the panel discussion Ahmad Adam, founder of AHA and Crescent Foods and Azeddine Bahi, Manager ARGML of the Grand Mosque of Lyon, France. Br. Zahed inquired about how to resolve the issues presented. Ahmad Adam answered that by applying Standards, labeling to give consumers free choice, and enfranchising shariah scholars, community leaders, and government to collectively address supply chain management, much can be improved.

HalalFire Media is the parent of Zabihah.com, and Br. Zahed shared his expertise on the Halal market. He noted that just food represents $660 billion USD per year worldwide. He has had unprecedented success in social media and analyzing metrics, but he said that it is not enough to just use social media. New technologies are critical and companies must respect and know their niche market. He concluded with, “It’s what you can prove and deliver.”

Finland based Muxlim.com’s Founder, Mohamed El-Fatatry, delivered a positively charged summary about reaching Muslim consumers with digital media. He wowed the crowd with his company’s focus on food, finance, and fun. His message evoked interest because he shared that Islamic Marketing is offered at Oxford University, Phoenix’s Thunderbird School of Global Management, and Turkish Bilkent University. Two hundred-fifty million Muslims seem to be online with only 3.5 million in the U.S. He also noted there are about 33 million Muslims online in each Turkey and Iran, which together represent roughly one quarter of online Muslims.

The good news was followed by Nazia Hussain, Head of Strategy for OgilvyNoor. She refined the perception of the current Halal movement as a “philosophy,” and stated that consumers are ahead of producers. The avenue for entrants is wide open.

Resolutions settled upon by the Forum were:  proactively promote Halal; train and audit certifiers; develop more research and scientific studies; mine greater data on Muslim buying power; Muslims need to voice their preferences on legislation; find informed consensus on GM and cloning applications; channel more Muslims toward careers in food science and food technology; educate students about the issues and encourage decisive participation.

To answer part of the resolutions, the climax of the Forum was a co-signing of Intent to Collaborate Agreement among the largest bodies attending the event. They were ISNA, AHA, IHI Alliance, and the MCB with the goal of establishing accreditation boards. This is the next logical step toward improving the quality and integrity of all Halal products and services.