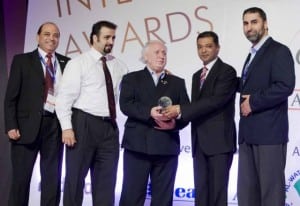 Midamar Corporation based in Cedar Rapids, Iowa  was crowned the winner of the coveted and prestigious international Gulfood award for “Best New Frozen or Chilled Food” for its newly launched Turkey Deli Meats line.  In 2012, Midamar Halal Smoked Peppered Beef Strips were deemed the “Best New Halal Food” by a panel of distinguished judges.  Midamar was also awarded the 2011 title for the All Natural ABF Air Chilled Halal Whole Chicken, and was the first US company to win the prestigious award.

Midamar also received recognition for highly commended entries in the Best New Fast Food Product or Innovation Award, Best New Halal Food Award and the Best New Foodservice Innovation Award.  Midamar Halal Beef Ribs and Chicken Tenders won second place in the above categories. Over  3800 companies from 110 countries were invited to compete for the awards and there were over 100s of submissions from 30 countries. The submitted products were judged by a panel of international food experts.

“Midamar is very pleased to be the proud recipient of the prestigious 2013 Gulfood Award for Best New Frozen or Chilled Product.  Winning this award is great recognition for the Midamar team. We have just launched our new Turkey Deli line here at Gulfood. Our customers told us they wanted a delicious and healthy whole chunk turkey breast line, and we developed our Halal turkey line to be low on fat and high on flavor. I think this is what appealed to the judges.” said Midamar Director Jalel Aossey.

The winners of the fourth Gulfood Awards, the Middle East’s most highly regarded food and beverage accolades, were crowned on Monday at a spectacular gala event held at the Ritz Carlton Hotel, DIFC in Dubai. The Gulfood Awards are organized by the Dubai World Trade Centre.

Trixee Loh, Senior Vice President for Dubai World Trade Centre, organizer of Gulfood said: “Both the level of interest and quality of submissions we have received for the awards has been exceptional. It is exciting to see regional players in the food and beverage industry raise the bar for excellence and innovation every year. As Gulfood continues to remain the largest annual food and hospitality trade show in the world, it is important to recognize those companies that contribute to the development of the industry through their creativity and inventiveness.”

Midamar has been attending Gulfood since the first show was organized more than 25 years ago and was the first American company to participate in the event.   Midamar has been promoting premium quality, USDA Certified US beef and poultry products in the Middle East and South East Asia for over 38 years.

Aossey added, “We are very honored to have won Gulfood Awards three out of the last four years. This third consecutive year and Midamar’s fourth Gulfood Award is testament quality and integrity of US products and Midamar’s Halal integrity.  This award is to be shared by all who helped make it happen from the farmers, to the processors, to the staff and members of Midamar and the logistics teams that helped get the product to the panel of judges.”

Midamar works closely with US Franchise concepts, offering sourcing, support and direction as they enter the rapidly growing Middle Eastern Hospitality Market.  Co-owner and Managing Director of Midamar, Jalel Aossey will be speaking in the afternoon session of the Food Franchise Workshop at the Gulfood Conference on  February 27, 2013 at 1:15pm. Jalel Aossey will deliver insights on food supply chain essentials, risk strategies and Halal considerations to investors, restaurant owners, franchisees, and franchisors at the conference.  Over the past 10 years, Aossey has been assisting international franchise operators in achieving smooth and seamless supply chain operations and ensuring lasting success of new restaurant developments in the region. Midamar owners and directors will be in Booth M106-M108 the American Pavilion until the show closes on the 28th.