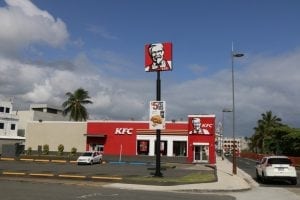 Afzal Lokhandwala, owner of eight Kentucky Fried Chicken franchises in Illinois, sued KFC Corporation in Chicago federal court, arguing enforcement of the policy would force him to close four of his restaurants, which sell halal chicken that is permissible according to Islamic law.

“For 14 years, KFCC has permitted and helped plaintiffs to sell halal poultry products to KFC customers,” the complaint states. “Despite the long-standing custom, practice and agreement between the parties for 14 years, KFCC, without justification or substantiation, is now attempting to enforce a policy allegedly in existence since 2009 on plaintiffs in violation of franchise agreements.”

Lokhandwala, a practicing Muslim, says he immigrated to the United States from India in 1989. He started out as an assistant manager at a KFC on the South Side of Chicago, and soon became manager before starting his own franchises.

He says he has been selling halal-certified poultry at his KFC stores since the first one opened in 2006.

“Thousands of Muslims within the Chicago metropolitan area eat at plaintiffs’ restaurants because they know Afzal is Muslim and the restaurants sell halal chicken,” according to the complaint.

However, in October 2016, KFC allegedly sent correspondence to Lokhandwala expressing concern that he was advertising and offering halal chicken in his restaurants, despite allowing him to sell it since 2003.

KFC also told Lokhandwala’s chicken supplier not to give the franchise owner a copy of its annual certificate from the Islamic Society of Washington Area confirming that it is a halal-certified slaughterer, according to the lawsuit.

Two months later, Lokhandwala says KFC claimed for the first time that it had a policy enacted in 2009 prohibiting “religious claims about KFC products in franchise restaurants, citing a risk of lawsuits and customer confusion.”

Lokhandwala alleges KFC never mentioned the policy in any of the parties’ franchise agreements, in violation of the Franchise Disclosure Act of 1987.

He fears “the enforcement of the policy will severely damage plaintiffs’ revenues and threatens to put them out of business. Plaintiffs’ customer base and business revenue is heavily dependent on the sale of halal chicken to the Muslim community in Illinois,” according to the complaint.

“If KFCC prohibits plaintiffs from selling and advertising the sale of halal chicken product at its restaurants, Afzal estimates he will lose 25 percent of gross revenues from these four restaurants, approximately $1 million annually,” the lawsuit states. “Afzal will be forced to close these locations and as a result, approximately 60 to 80 KFC employees will lose their jobs, and four storefronts will likely be left vacant.”

In February of this year, counsel for KFC suggested that Lokhandwala register as a dealer of halal food products with the Illinois Department of Agriculture in order to continue to sell halal chicken, he says.

However, after becoming a certified dealer, Lokhandwala claims KFC still refused to allow him to post signage stating the name and address of the food distributor and slaughter facility, as mandated by halal food-disclosure requirements in Illinois law.

According to the complaint, KFC has sent Lokhandwala cease-and-desist letters stating that he needs to stop making religious claims about the company’s products and his failure to do so would result in a breach of the franchise agreement and possible termination of his franchises.

“Defendant has not adequately examined the effect that enforcement of their policy would have on plaintiffs, and are either deliberately enforcing this policy to destroy plaintiffs’ business or are doing so with reckless indifference to the continued viability of plaintiffs’ franchise restaurants,” the lawsuit states.

Lokhandwala seeks a preliminary injunction against the religious-claims policy and wants a judge to declare that enforcement of the policy is in bad faith and not allowed by the franchise agreements.

He is represented by Michael Goldberg in Chicago.

KFC Corporation is a Delaware corporation headquartered in Kentucky. It was founded by Col. Harland Sanders and has over 20,000 locations worldwide, according to the complaint.

A KFC spokesperson said in a statement that it cannot comment on the specifics of pending litigation but the company “values its customers and franchisees of different faiths.”

“We recognize that many of our valued customers have specific dietary requirements associated with their religious beliefs.  Unfortunately, we are not able to make religious claims, such as Halal or Kosher, about KFC products at this time,” the statement reads. “There are two barriers that we are not able to overcome.  First, there are different interpretations of these terms within the same religious faith.  Second, KFC cannot certify that in-restaurant preparation and cooking processes meet religious guidelines, for example restricting contact with non-Halal or non-Kosher food.”