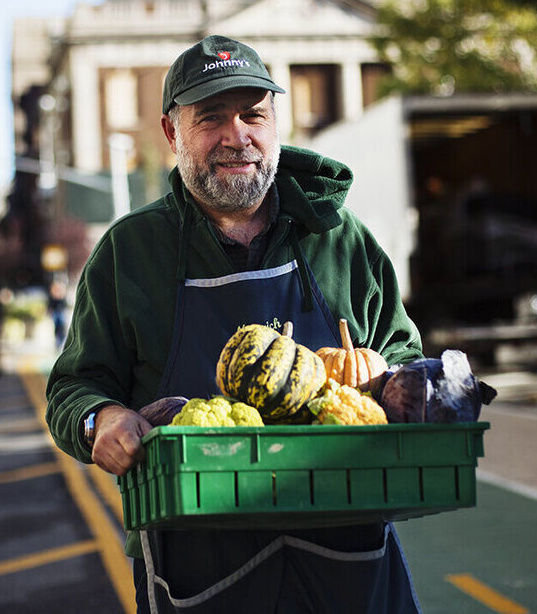 On Monday, Nov. 28, Colgate University students had the opportunity to learn from the Northeast Organic Farming Association of New York’s Farmer of the Year, Zaid Kurdeih in a talk titled, “Norwich Meadows Farm: A Conversation with Zaid Kurdeih.” The talk was sponsored by the departments of religion and environmental studies, the Upstate Institute and Colgate Community Garden. It was primarily in thanks to the outreach of Assistant Professor of Religion Chloe Blackshear, who specializes in the eco-halal movement, the philosophy of tayyib and the agricultural COVID response. Blackshear visited the Farm earlier in the semester with her Feasting and Fasting: Religion and Food class. During the conversation, Kurdeih discussed his sustainable farming practices which are influenced by his Muslim faith.

Kurdeih is a Muslim who was born in the United States but grew up in the Middle East and, by all accounts, strives to implement his Islamic faith in his profession by following a halal lifestyle. Halal is a legal system that dictates what practices are acceptable for Muslims to do. A well-known example is that eating pork is haram — the opposite of halal — for Muslims. Kurdeih also discussed how his faith affects which crops he can grow, even if it is not something he will consume himself.

“For example, I couldn’t get involved in growing marijuana,” Kurdeih said. “Even though a lot of farmers are trying because it could be a salvation in terms of financials, I couldn’t do that. Marijuana to us is something that alters the mind, it’s not good for you, and therefore you cannot grow it. It’s haram.”

Halal does not only dictate what foods Muslims can eat but also contains rules about business practices, meaning Norwich Farms cannot buy products from or work with every agriculture company.

“I was very interested and intrigued when [Kurdeih] was talking about how the farm cannot take interest [and has] to treat the land and animals with rights because he is a Muslim and abides by Sharia law,” first-year attendee Zora Rothenburg said.

The other Islamic idea that influences Kurdeih is tayyib, or all things good and pure made lawful unto you, according to the Quran.  Kurdeih explained how modern-day pesticides and chemicals, which affect the chemical makeup of crops, complicate what falls under tayyib.

“The industrial age has changed everything. A hundred years ago, nobody would even have these conversations […] For us, from day one, I studied food science, so I was always looking into the chemical makeup of food because I was introduced to what could be in food that they don’t tell you about. So this whole issue of ‘pure,’ people are looking at it in the Muslim community much closer because, again, they are facing the same issue that everybody else is facing, which is: ‘what’s in our food?’” Kurdeih said.

Because of this, Norwich Farms avoids chemicals and only uses natural fertilizer. One example of this approach was a picture Kurdeih showed of watermelon leaves coated in clay. The clay detracts bugs from eating the leaves, a natural method that protects both the plant and the humans who eat the fruit.

Kurdeih then went on to explain how the Islamic belief that humans are put on Earth to create communal influences his farming practices.

“This is our basic belief: God placed us on Earth for multiple reasons but one of them is to basically, as the English translation says, ‘may you husband it.’ So what does that mean? Settle it or build upon it. We are here to, in the best possible way, build and create community,” Kurdeih said.

At the event, Kurdeih’s spirit of community extended into Colgate’s classrooms. Julie Dudrick, associate director of the Upstate Institute, explained how this talk exemplifies Colgate’s intention to showcase a range of perspectives to students through speakers on campus.

“People who live around [the University] always think of Colgate as having a monopoly on knowledge, right? […] So they’re often quite honored when we want to include them in the process of educating students and saying that we value different types of knowledge and different sources of knowledge. And so not only are we here as researchers to contribute to a collective thought and collective knowledge, but we’re also here to teach each other,” Dudrick said.

Students from Visiting Assistant Professor of religion and Jewish studies Chloe Blackshear’s class got another taste (literally) of Kurdeih’s work on a trip to Norwich Meadows.

“The students sampled vegetables they’d never tried before and also said they were the most delicious things they’d ever eaten,” Blackshear said. “The sheer variety of produce there is really incredible. We were also able to witness the river right by the land that’s used for irrigation. We also heard a lot about the amazing titration of nutrients they use, since it’s all organic, but [each crop] has a different regimen for watering and nutrients that’s really precise [and] that’s really cool to learn about.”

Blackshear echoed Dudrick’s sentiments on developing a University community that extends past the physical boundaries of the campus.

“I think it was really wonderful for students to see that this was right in our backyard,” Blackshear said. “This was half an hour away, it was a really short trip on the bus, [but] they hadn’t realized it was there.”

“I would love to take an Islam class and learn more about the laws and practices of Islam and how they influence the lives of Muslims across the world,” Rothenburg said.

“Do you feel more connected to your religion now that you are participating in agriculture?”

Kurdeih responded. “When you’re faced with reality it can be difficult to stay faithful.… We are now in a better financial position than ever before, which can also make you fall harder.… COVID and floods were difficult, but for the most part, we’ve been able to handle ourselves. However, doing things like high tunneling [a method to protect crops that have difficulty growing in New York’s ecosystem], crop breeding, and other things would be more difficult if money became more difficult.”