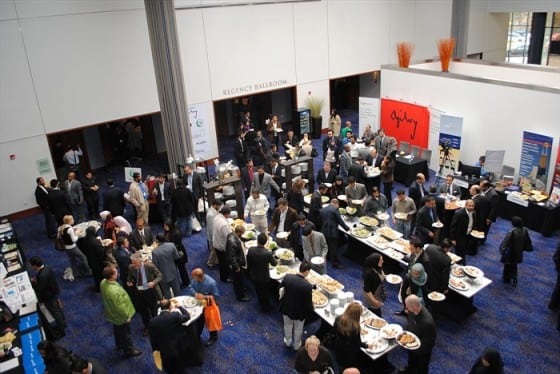 We’re rich.  We’re well educated.  And according to one of the conference’s moderators, Shahid Khan (Chairman for MediaMorph), we’re all very good looking (Statistics are still being compiled on the last point).  The American Muslim Consumer Conference was held at the Hyatt Regency in New Brunswick, this past weekend.  The idea behind the conference was to not only connect young Muslim professionals but to also provide a platform for marketers to discuss the buying power of Muslim Americans.  It was an intimate gathering of roughly 300 people, but all major players were involved from Ogilvy & Mather Worldwide to CNN to PepsiCo.  That’s right, multinational corporations are choosing to engage with us… and it feels really good.

The conference started with a keynote from Magali Rheault, a senior analyst from the Gallup Center for Muslim Studies, who spoke about interesting statistics concerning the Muslim American market.  Some surprising statistics included a quarter of the Muslim American consumer market is self-employed or owns their own business but the most unique statistic provided by Gallup that morning was there is a very small income disparity between Muslim American men and women.  That’s right sisters, we don’t need to ask what Destiny’s Child did, “Can you pay my bills, can you pay automo’billes…” And then a discussion about halal products ensued, where it was determined that there needs to be a standardized body that certifies halal products.  Dr. Mehmood Khan, Senior Vice President and Chief Scientific Officer at PepsiCo had thought-provoking questions to ask throughout the panel, to help come to a definition of what a halal product actually was.

A sweet and honorable moment took place in the middle of the conference, where Best Buy’s marketing manager, Nausheena Hussain, was awarded for recognizing, Eid-al- Adha, in a national advertisement for Best Buy.  Not only was our community proud of Best Buy reaching out, but we also followed up with some serious buying power.

The most fun part of the conference was the AMCC SME Showcase:  Presentations by upcoming entrepreneurs followed by distinguished panel discussion and analysis.  Young professionals presented their business ideas and were schooled by an experienced panel.  Adnan Durrani, Chief Halal Officer at the American Halal Company; James Kocsi, District Director at the US Small Business Administration; Bami Bastani, Chairman at B2 Global Consulting, and Tariq Farid, Founder and CEO of Edible Arrangements all played Simon Cowell, Paula Abdul and Rande Davis.  Though there was a consensus that Adnan Durrani was officially the Simon Cowell of this panel.

Finally, the AMCC closed off with a keynote from the CEO of Ogilvy & Mather Worldwide. He had great things to say about the buying power of the Muslim community worldwide.  Recently, Ogilvy Noor was launched in May of 2010, calling itself the “world’s first specialist Islamic branding consultancy.” Proving, Muslims are a market that cannot be denied…mostly because we are rich, there are a lot of us and more importantly, we are very brand conscious!

All in all the conference was a huge success.  The attendance brought the best of the best and more importantly they were all making connections.  The conference organizers at MLink did a great service to the Muslim community and we’re looking forward to what next year will be like.