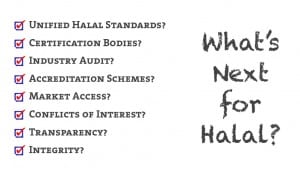 The four specialist Forums at the World Halal Summit cover a wide range of topics for Certifiers, Business, Scholars and Academics. The full range of topics, speakers and panelists is available online; the short version is that there are over thirty sessions and over seventy speakers, panelists and moderators over the two and a half days from 1-3 April. They are also all sold-out.

Reviewing the session contents, there are several themes that are going to form an integral part of the on-going narrative of the Halal Ecosystem over the next five to ten years.

One of the key issues is accreditation

This has been the missing element in the Halal industry. As the Halal sector has evolved, certification bodies have been of two basic types: government related bodies such as are found in Southeast Asia, and independent associations and businesses in the Muslim minority food exporting countries. The government bodies also act as de-facto accreditation bodies, making bilateral arrangements with the independents, and also, (somewhat grudgingly it always seems) having mutual recognition agreements with each other, despite their obvious national agendas. The independent CB’s established themselves in a lucrative market niche with little oversight or supervision, and have operated within the parameters of their own morals and range of opportunities.

Not any more. One of the advantages of not being first to market is you are ideally placed to see the lie of the land and the roll of the road, what works and what doesn’t. And crucially, what is missing.

What was missing was a layer of accreditation bodies that would oversee the CB’s (both types presumably), rationalise the operational procedures of Halal integrity auditing, and bring it into line with international procedures in the mainstream food industry, of which Halal is a sub-set.

There are accreditation schemes in development for the OIC member countries under SMIIC, as well as full-on global schemes being developed in the UAE. Both of these are going to have a significant impact on the dynamics of the Halal marketplace in the coming years.

And while Southeast Asian countries may regard these innovations with an almost detectable degree of suspicion (after all, we have been doing this for decades, and now you want us to be accredited by you…?), the multinationals and the major exporting countries will probably breathe a sigh of relief…assuming these schemes can actually deliver what they claim on the tin. The reactions of the independents will be something to write about after the WHS is over! Watch this space…

Whatever the outcomes of these sessions, the arrival of accreditation schemes as a viable and workable component of the Halal sector will be a game-changer.

Things will not be the same afterwards.