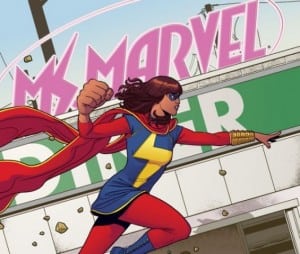 When we think of superheroes, we think of strong, foreboding figures who have otherwordly control over themselves and their element in other to fight the good fight. Classic superheroes are, by and large, white, male (with some very notable exceptions), muscular; and each has proven their weight in worthwhile stories and historic events, to find themselves with a cult of personality that means even just their logo on an object makes that object desirable.

What we don’t think of are insecure teenagers from an ethnic minority who are just as obsessed with heroes as we are and who, when given their powers, struggle with the notion that they are now the thing that they hold so dearly. And that is exactly what Marvel presented to us in February this year, when Ms. Marvel of the Marvel NOW! imprint landed on our shelves.

Meet Kamala Khan. Aside from being female, a demographic already woefully under-represented in mainstream comics, she’s a young teenager with normal teenage problems; over-bearing parents, a sibling rivalry with an older brother, a cute boy whose been a friend until now, a small set of trusted friends, and a general inability to be part of the ‘popular’ crew. Of course, all this typical teenage angst is complimented by the fact that Kamala is also part of the Muslim community in Jersey City. Now, Kamala isn’t the first Muslim character in Marvel’s history (with ‘M’ being perhaps the next most known character of the religion), but she is the first Muslim character to headline her own book. Though Kamala had two background appearances in Captain Marvel issues 14 and 17, her first real appearance in a comic book was in Ms. Marvel #1 – so she had a lot of expectations to deal with as soon as we opened the first cover.

Not that anyone was particularly worried, mind, as in the weeks preceding her arrival she had already developed quite the following, and that following continues to make the Kamala Korps a formidable fandom. But this isn’t about Kamala’s success (okay, it’s kind of about Kamala’s success); it’s about what Kamala has, in her short lifespan so far, come to represent for Marvel, and hopefully will continue to represent for mainstream comics in general.

You see, what G. Willow Wilson, Ms. Marvel’s lead writer, has cultivated with our new favorite Muslim heroine isn’t just another superhero, nor is she just another teenage role model; she’s an analysis of why we love superheroes, and why we buy comics in the first place. In her first issue, we’re shown a young woman who is altogether aware of superhero culture, and instead of just living  in a world in which crime is rampant and super-villainy could take over, she embraces it and adores it. When we first see Kamala at home, it’s at her computer, writing Avengers fan-fiction, her mother having to humor her overwhelming obsession. This is important, not because it builds a relationship between reader and protagonist, but because it builds a solid foundation where the reader and the protagonist feel one in the same. Not just in principle, or tear-jerking idealism, but genuinely as part of the collective geek culture that we all love – and this is still before her Muslim heritage and customs come to the fore (but more on that a little later).

In an interview with Vulture, when asked about Khan being such a devoted fan, Wilson stated

Being a Muslim in America, I’ve noticed that there’s a ton of crossover between the Muslim community and geekdom. Part of that is outsider culture: When you’re growing up as a minority and you feel somewhat alienated from the mainstream, you’re going to seek out other people who feel that way. That’s what geek culture is traditionally about.

And she’s whole-heartedly correct, because that is what geek culture is about – celebrating what we all love and admire together, instead of the lifestyle differences we have. Opening with Kamala engaging in the culture of celebration is a strong narrative theme for her that remains not only through that first issue, but throughout her entire first story-arc, and its something Marvel and Wilson are obviously keen on maintaining and having other characters be a part of.

Not just any other characters either; their biggest and best. In issue 6, she encounters Wolverine in a tussle with a giant sewer alligator, and instead of just getting the job done and beating down the green monstrosity (which she does anyways) she freaks out over meeting one of her idols, eventually getting a selfie as a keepsake (the very same used for the cover of issue 7). And then in Amazing Spider-Man #7, one of Marvel’s champion solo series’, Kamala features on the cover with the web-slinging menace as part of his current Spider-Verse event, helping ol’ Petey out with the wee inter-dimensional mess he happens to be in. Kamala is already, not even a year on our shelves, an ingrained member of the pack, already a part of history in a big character event and, more importantly, living our dream on the page through her fangirl-heavy interactions with Marvel’s elite.

Outside of her fandom, though, Kamala is also a teenage girl coming from a Muslim family in a majority non-Muslim community. She doesn’t wear a hijab all the time, as neither do a lot of inner city young women of Muslim families, but she does wear a hijab when she visits Sheikh Abdullah’s youth lectures, where she gets to sit with her friend Nakia. Wilson’s want for authenticity in the Khan family’s practises is ongoing, as Kamala attempts to balance her need for her own identity with not disappointing her parents and acknowledging their love for her. In an interview with the BBC in November 2013, Willow made it clear that Kamala was going to be a Muslim superhero, saying that, “I wanted to make a story in which the Muslim woman narrates her own life.” So much so has Wilson done that, that Kamala doesn’t just get her powers, she actively questions and struggles with whether or not she truly wanted them.

Upon her first receiving her powers, Kamala turns from her brown hair and dark skinned self into a blonde, white woman – former Ms. Marvel/current Captain Marvel, Carol Danvers. As soon as she realizes how she looks, she forgets about asking to be “beautiful and awesome and butt-kicking and less complicated” and instead asks “Is it too late to change my mind?”  She then continues to question her unconscious choices, asking “Why do I just feel freaked out and underdressed?” This is what makes Kamala Khan so important – she, as a member of several cultural minorities, does not want to lose herself and who and what she represents for the sake of being an idol or superhero, and actively rejects the inherent standards of that world.

In an episode of the YouTube show Idea Channel, Mike Rugnetta puts forward the idea that through Kamala Khan, editor Sana Amanat, writer G. Willow Wilson and artist Arian Alphona have organized a space in comics for the under-represented. He’s not wrong, because – even though Kamala is of a very particular American-Pakistani and Muslim heritage – much of what she goes through is common to everyone. And this, again, is a conscious effort on the creative team’s part. In an interview from NYCC this year (http://www.unleashthefanboy.com/comics/nycc-exclusive-interview-ms-marvels-g-willow-wilson/124010), upon being told the interviewer is Jewish and yet still identified with many of the Khan family dynamics, Wilson responded, saying,

You know, what I tried to do was just pull on the threads that I thought would be familiar. We’ve all got the experience being teenagers….. I just really tried to show that all of that same stuff exists in Kamala’s family. It’s the sort of dynamics that people can recognize. They might be speaking a different language. They might have a different religion, but the dynamic is something that almost anybody will recognize.

2014 has been a huge year for Marvel, with the last 6 months in particular having our little fangirl-and-boy hearts going into overdrive at the notion of Captain Marvel and Black Panther finally hitting the big screen, breaking the standard of straight white male-led comic book films. Storm and She-Hulk have both seen very critically acclaimed solo series, and Miles Morales has returned to a very warm, and lasting, welcome. Even more recently, Thor has become a woman, and the Falcon himself has taken up the mantle of Captain America. It would be naïve to suggest that these successes and steps forward are because of Ms. Marvel’s success alone; but even with some of these books not being as popular as others (for reasons that have nothing to do with their quality, I can assure you of that), Kamala and the ever-growing Kamala Korps are definitely at least proof that Marvel is trying to move forward and shake some of these old bones up. With characters like Kamala and Carol and Miles amongst the old guard, the future is bright and varied; and I, for one, wouldn’t want it any other way.